Tomic bundled out in Brisbane

Bernard Tomic has been knocked out of the 2015 Brisbane International in straight sets at the hands of second seed Kei Nishikori. 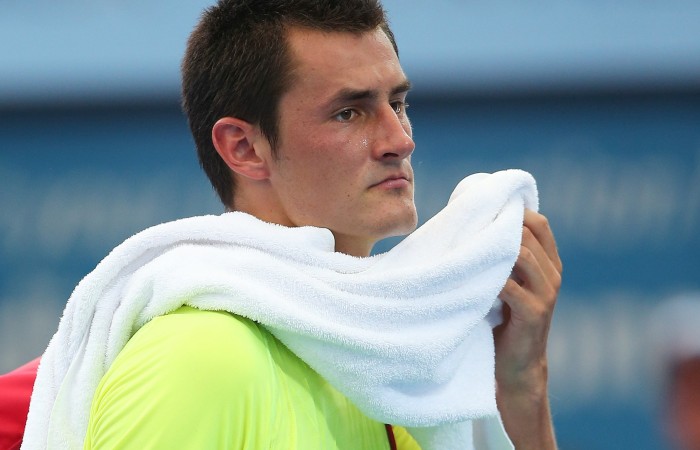 Bernard Tomic has received a sobering reality check ahead of the Australian Open, thrashed by second seed Kei Nishikori at the Brisbane International.

Tomic hardly troubled Japan’s world No.5, who stormed to a 6-0 6-4 quarterfinal victory in just 58 minutes.

The only remaining Australian at the tournament is wildcard James Duckworth, who takes on top seed Federer in the final men’s quarter-final on Friday night.

World No.53 Tomic appeared to arrive at Brisbane fitter than ever following hip surgery that interrupted his last season.

And he had looked the goods on court, dismissing American Sam Querrey and putting Australian teenager Thanasi Kokkinakis in his place in the first two rounds.

However, the former Wimbledon quarterfinalist ran out of legs against Nishikori, who came out swinging in front of a shellshocked Pat Rafter Arena crowd.

Nishikori thrashed 15 winners to Tomic’s six as the Australian made six unforced errors in a whirlwind first set that lasted just 21 minutes.

Tomic tried to regroup in the second but Nishikori broke in the 10th game before serving out the match.

It is a setback for Tomic, who had built momentum returning from hip surgery last year, claiming a second career title in Bogota and a Stockholm semifinal berth.

Nishikori finished 2014 in the top 10 for the first time after a breakthrough year which featured his US Open final appearance.

Meanwhile, world No.85 Groth may have been ranked 77 places lower than the big serving Raonic but the 27-year-old did not look outclassed in an encouraging sign ahead of the Australian Open.

Groth holds the record for the world’s fastest recorded serve at 263.4kph and it was once again his big weapon against fellow big hitter Raonic.

Groth did not have his serve broken once in the quarter-final shootout that featured a total of 37 aces, including 22 to the Victorian.