Tomic too good for Kokkinakis

Bernard Tomic has moved through to the quarterfinals of the Brisbane International after defeating Thanasi Kokkinakis in straight sets. 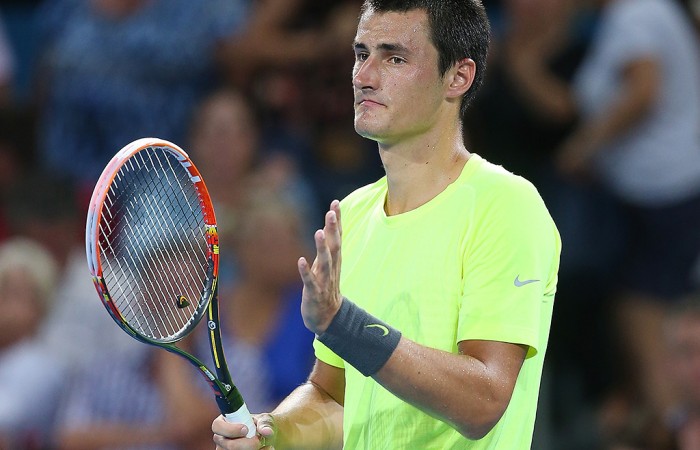 Bernard Tomic has moved through to the quarterfinals of the Brisbane International tennis tournament after quelling an admirable challenge from fellow Australian young gun Thanasi Kokkinakis.

Tomic’s encouraging start to 2015 continued with the 7-6 (7-2) 6-1 victory over the Adelaide-born teenage sensation on Wednesday night at Pat Rafter Arena.

On this evidence, Nishikori will be given a real run for his money by a visibly fitter and mentally rejuvenated Tomic.

The 22-year-old dealt well with Kokkinakis’ lethal forehand and managed to grind down his compatriot.

Kokkinakis, 18, will be a frightening prospect when he fills out his 196cm frame – but, for now, suggestions he is ready to overtake Tomic in the Australian pecking order are premature.

With Australian great Rod Laver watching on from the sidelines, there was precious little separating the pair in a tight and entertaining first set that went the distance.

Both held their serve throughout and, although Kokkinakis did it a fraction more comfortably, it was Tomic who took command in the tiebreaker to take first blood.

His experience shone through in the second when he took advantage of some sloppy errors from the 18-year-old, who fell away badly late on, to claim the first break of the match, before wrapping up the set in just 26 minutes.