When John Millman was undergoing a lengthy recuperation from a serious shoulder injury, a match-up against Roger Federer seemed the last thing that would happen. 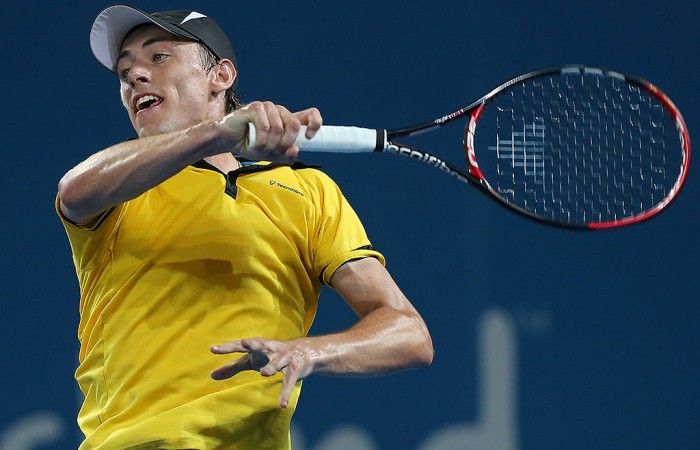 When John Millman was undergoing seemingly endless recuperation from a serious shoulder injury, a match-up against tennis legend Roger Federer seemed the last thing that would happen.

In 2013, Millman had reached a career-high world ranking of 126 and was preparing to play in the French Open as a wildcard when his career came to a sudden halt.

A torn labrum in his right shoulder required surgery and then months of repetitive, mind-numbing recuperation that had the 25-year-old questioning if he would play again.

That’s what made Tuesday’s first round win at the Brisbane International so rewarding for the Brisbane product, setting up a glamour clash with the 17-time grand slam champion – two years after the previous highlight of his career against Andy Murray at the same venue.

The world No.153 is unlikely to beat Federer on Thursday night at Pat Rafter Arena, but coach Mark Draper says it won’t be for a lack of trying.

“Johnny will just go out, he’s got nothing to lose,” Draper told AAP.

“I’m sure he’ll be swinging from the hip.”

Draper is one of several people Millman was quick to credit after his opening round 6-3 6-1 win over American qualifier Rhyne Williams.

He says the team behind him has played a key role in getting him back on the court and he’s eager to share every success with them.

Draper believes there’s also no reason Millman can’t get back or even eclipse his pre-injury heights.

“We’re all very confident that he’s back on track and on his way to the top 100,” Draper said

“He’s got nothing to defend for about eight months so assuming he stays fit and healthy there’s only upsides for him.

“He got a screening today from our physio at Tennis Australia and she said his body’s looking good, his shoulder’s really good.

“Finger’s crossed nothing will prevent him having a good roll on this year.”