Having overcome the big serve of American Sam Querrey, Bernard Tomic feels he is perfectly equipped for his battle with Thanasi Kokkinakis in Brisbane. 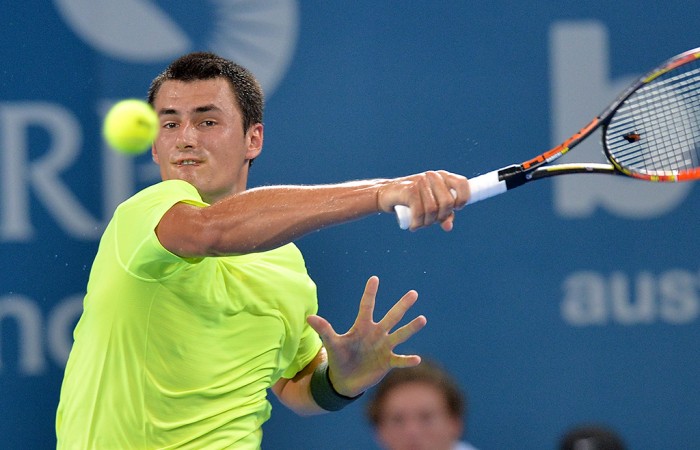 Having overcome the big serve of American Sam Querrey, Bernard Tomic feels he is perfectly equipped for his battle with Thanasi Kokkinakis in Brisbane.

Tomic set up the all-Australian clash in the second round of the Brisbane International after toppling the powerful Querrey 7-5 7-6(5) at Pat Rafter Arena on Monday night.

It didn’t come easy – Querrey was on fire early in the match with a flurry of aces in the first set, finishing with 20 for the match.

Tomic believes the experience will hold him in good stead for his encounter with 18-year-old Kokkinakis, who took down Frenchman Julien Benneteau in straight sets earlier on Monday.

“I think Sam has one of the top five, six serves out there,” he said.

“The way I’m playing and moving, I’m very confident. I lost a few kilos. I’ve been training hard, working hard and it’s been paying off.

“(Kokkinakis) is sitting at 150 in the world but that makes him a dangerous player. I remember myself when I was ranked 150 and 180, I had nothing to lose, going out against these big players and playing my game.”

Tomic showed great character to fight back from 4-2 down in the first set against Querrey and stage a remarkable recovery, winning 16 of the last 17 points to swing all the momentum his way.

It was a significant turnaround and a good sign ahead of the Australian Open, which begins on January 19.

“That first set, he was playing very good. I had to stay in there, try, and I got my chance,” Tomic said.

“I played very good tennis from 5-4 down in the first and played really confidently well in the second.”

Tomic slowly took control of the baseline rallies with his powerful forehand though Querrey, number 35 in the world, continued to produce aces at vital moments.

Neither player could find the break in a tense second set, but Tomic’s forehand eventually helped him craft the opportunity he needed to win the game in the tiebreak and kickstart his first tournament in Brisbane since 2012.