Unheralded Brisbane product John Millman is set to clash with Roger Federer at the 2015 Brisbane International. 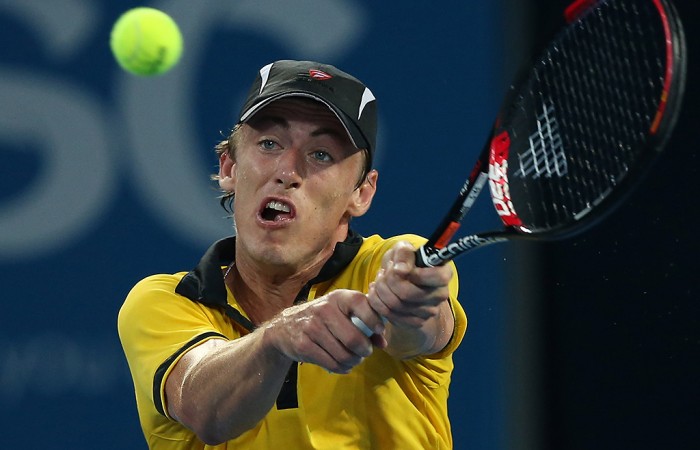 He might be the Brisbane International’s biggest drawcard but Roger Federer will face a hometown favourite in his second round clash at Pat Rafter Arena.

Unheralded Brisbane product John Millman, who took on two-time grand slam champion Andy Murray in the same event three years ago, will face the Swiss master after winning his first round match on Tuesday.

It’s a huge reward for the 25-year-old, who has battled back from a serious shoulder injury which he feared could have ended his career.

Millman says the lure of taking on Federer possibly added a little extra motivation on his way to a 6-3 6-1 win over American qualifier Rhyne Williams.

“Federer, I mean, a lot of people throw it out there that he’s the greatest of all time, and he might well be,” the world No.153 said.

“As a person I don’t know him, but what he’s done for the game, only positive things get said about him. So there is all that.

“But when you step on the court and the first point gets struck, just like I had against Murray, you don’t play someone’s reputation.

“As soon as you start playing someone’s reputation, you’ve lost before you’ve even started.”

While the stands were packed around Federer’s practice court on Tuesday, Millman concedes he had “about four” people watching him warm-up.

He’s under no illusion about the task ahead but expects to get a bit of help from the stands.

“I will have a lot of support,” he said.

“I know my mates will be littered throughout the stadium and probably come down hard on the guys supporting Federer. I heard they did that to the Murray ones, too.

“The Brisbane people just get behind me, and I seem to love playing here. Hopefully it’ll be no different on Thursday.”

While Millman was the big winner on Tuesday, it was a quick exit for last year’s quarter-finalist Marinko Matosevic.

“I’ll take any chance I get to represent Australia,” he said.

Elsewhere, South African fifth seed Kevin Anderson became the third seeded player to drop out in the opening round when he lost to Polish qualifier Lukasz Kubot.

Tuesday’s action wraps up with an all-Australian affair between defending champion Lleyton Hewitt and Sam Groth.