Sam Stosur’s Australian summer campaign has gotten off to a less-than-ideal start after she fell in three sets to Varvara Lepchenko in the opening round of the Brisbane International. 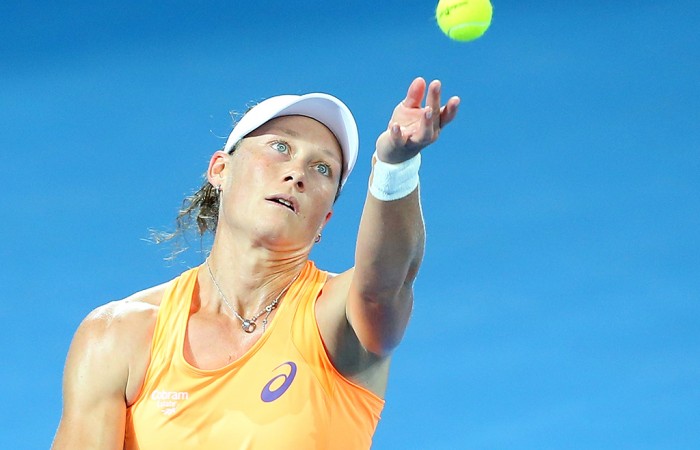 Sam Stosur’s Australian summer campaign has gotten off to a less-than-ideal start after the world No.22 fell in three sets to Varvara Lepchenko in the opening round of the Brisbane International.

Stosur led 5-1 in the third set and even reached a match point, only for a deep forehand to be called out on a rally she had control of.

The match point was replayed, and Lepchenko won it to level scores at deuce.

From there, the American, playing her most relentless and aggressive tennis of the match with nary an unforced error, reeled off six straight games to close out a 4-6 6-4 7-5 victory.

However, Stosur said alarm bells weren’t ringing ahead of the Australian Open despite letting a the third set lead slip.

“For 99 per cent of that match I’m really happy with the way that I played and what I did,” the former world No.4 said.

“That was the most comfortable and I feel like one of the best matches I’ve played to start my campaign.

“I would go out there and do it all over again.”

In five outings, Stosur has never moved past the Brisbane International second round.

But Stosur did not believe the first round loss exposed any mental demons to exorcise before again tackling the overwhelming home crowd expectation at this month’s Australian Open.

“I don’t necessarily think that tonight was a big, you know, mental capitulation,” she said.

“Obviously different people will have their opinions, and that’s fine.

“Look, there is always (home crowd) pressure; there is always that thing going on. I know the way I’ve handled it in the past, but I don’t feel like that at all tonight.

“It’s easy to kind of jump way down the deep end and say how bad it was. I don’t want to go down that road, because I don’t think it was like that.”

Stosur will next contest the Sydney International, beginning 11 January.