She's on the verge of turning 30, but Australian Casey Dellacqua has no plans of winding down as she eyes off some long-awaited silverware in 2015. 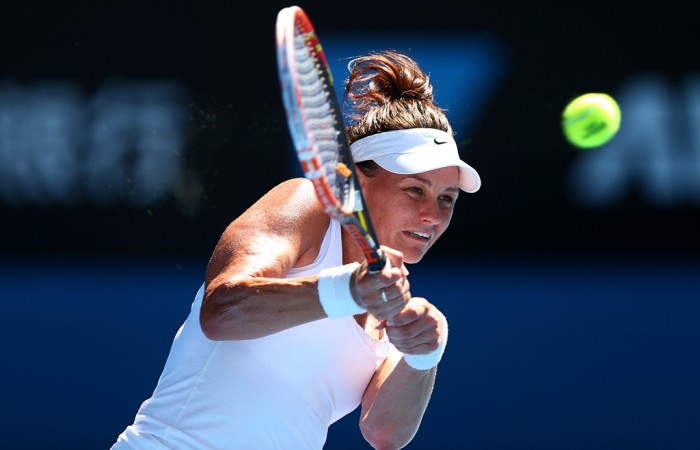 She’s on the verge of turning 30, but Australian Casey Dellacqua has no plans of winding down as she eyes off some long-awaited silverware in 2015.

Dellacqua enjoyed a career revival in 2014, with the West Australian shooting up to No.29 in the world rankings after reaching the fourth rounds of both the Australian and US Opens.

Her most consistent year on tour – both form and injury wise – has Dellacqua primed to make further strides in 2015, with a move into the top 20 now a realistic goal.

And Dellacqua is optimistic she will be able to win her maiden WTA singles crown at some point over the next 12 months to add to her three doubles titles.

“I’d love to win a tour title,” Dellacqua said after arriving in Perth in preparation for the Hopman Cup.

“I’ve made quarterfinals of big tournaments like Indian Wells, and I’ve made semifinals of tour events. But I’d love to win a WTA title.

“Last year showed I can compete, but I’ve still got some work to do if I want to compete with that next echelon of top-10 girls.”

Of the current women’s top 10, only Simona Halep and Eugenie Bouchard are below the age of 24, with 33-year-old Serena Williams sitting on top of the rankings.

Dellacqua, who turns 30 on February 11, believes age is now an asset in the women’s game.

“I think our sport is just so demanding. Week-in, week-out it’s just so tough, and I think the experience comes into it,” said Dellacqua, whose career was in jeopardy a few years ago following a series of debilitating shoulder and foot injuries.

“A lot of girls are playing their best tennis when they hit 30. And for me, I think that’s probably the case as well.

“It’s certainly nice to know that even though I’m 30 next year, I’ll still be able to compete with the young kids.”

Dellacqua will be back in action on Sunday night when she takes on world No.6 Agnieszka Radwanska as part of Australia’s Hopman Cup tie against Poland.

Australia haven’t won the mixed-teams event since Mark Philippoussis and Jelena Dokic reigned supreme in 1999, but Dellacqua and rising star Nick Kyrgios will attempt to change that in 2015.