Recovering well, Stosur has Aussie glory in her sights

At full tilt for her first proper pre-season in three years, Sam Stosur refuses to believe the sun has set on her chances of a coveted Australian Open title. 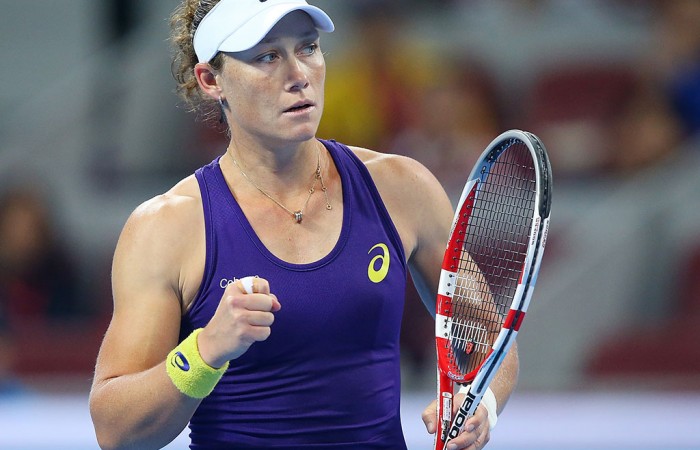 At full tilt for her first proper pre-season in three years, Sam Stosur refuses to believe the sun has set on her chances of a coveted Australian Open title.

Despite tennis great John Newcombe, an avowed Stosur fan, fearing time was running out for the 30-year-old to add to her sole Grand Slam title, she’s staunchly preparing for a strong showing this summer.

It won’t be easy for Stosur after finishing 2014 outside the top-20 rankings for the first time in six years and starting 2015 at the notoriously difficult Brisbane International.

The Gold Coaster has never passed the second round at Pat Rafter Arena in the Queensland capital and this year will be at the mercy of the tough draw – featuring Maria Sharapova, Ana Ivanovic and Victoria Azarenka – after missing a seeding by one position.

But she remains upbeat after recovering well from the foot injury (torn plantar fascia) which ended her season early after grabbing a sixth career title at Osaka in October.

The world No.23 has regularly entered her Australian campaigns underdone following a string of niggles, plus ankle surgery in 2012, and ultimately failed to fire at Melbourne Park.

This time she’ll have more than a month of 100 per cent court movement under her belt before starting the summer in Brisbane.

She kicked off her moon-boot last month and has been able to get strength and speed back into her rejuvenated legs at the preferred rate.

“It’s given me a chance to get things going again and the last few weeks have been really good,” Stosur told AAP. “I’ve been able to hit a fair bit and play open court and move and do all those things.

“Everything has pretty much gone to plan.”

New coach Simon Rea, who replaced Miles Maclagan after Wimbledon, is highly confident a healthy, fit Stosur can return to the top of the women’s game.

The 2011 US Open champion certainly still thinks much like she has done as a top-10 player and won’t panic as she enters her twilight years.

“I know I’m not going to play tennis forever but who knows how many years I do have left,” she said on Monday.

“You don’t want to get stuck in that `oh jeez, do I have two left or four left or five?’ (attitude) and panic about that.

“I’ve got to go into (the year) playing the Australian Open and play well and do everything I want to do.

“I’ve got to approach it like any other tournament and I’m not going to get caught up in thinking it’s all coming to an end and this is my last chance.”