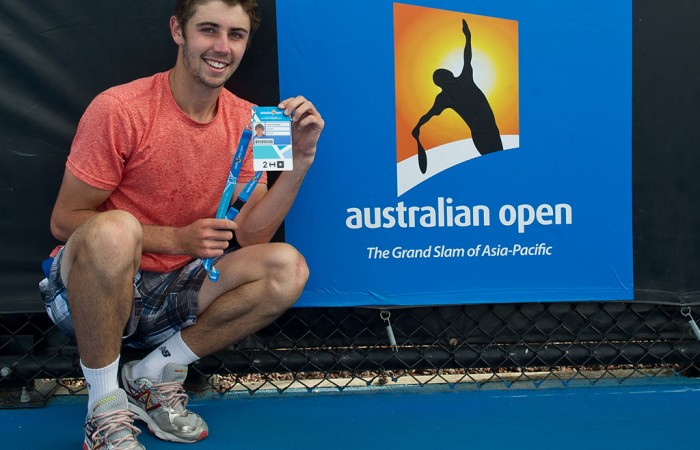 The New South Welshman defended his Play-off title with an epic 6-1 6-3 1-6 6-7(2) 9-7 over second seed John-Patrick Smith, played in brutally hot conditions at Melbourne Park on Sunday.

As the match wore on and the temperature climbed into the mid 30s, it became a battle of physical fitness and mental will over technique and tactics.

The trainer was on court attending to both players; Thompson suffered a blood nose and quadricep cramps while Smith sustained a jarred knee and was later stricken with even more serious cramps.

Slumped in a courtside chair following the victory, Thompson spoke to the media and recounted “the most gruelling match” he had ever played.

“I couldn’t even remember the score when I was winning – I just knew I had to win one more game,” he said.

“If I go to five in the Australian Open hopefully I’ll be fitter for it and hopefully it won’t be as hot, because I really think that hurt me.

“I just competed really well and got there in the end.”

It was a match of wild momentum swings. Thompson led by two sets to love and seemed on course for a routine victory, only for Smith to find the range on his errant forehand and begin to work his way back into the match.

Thompson became extremely frustrated as the left-handed Queenslander moved towards leveling scores, and once it was two sets apiece, Smith looked to have won the mental battle.

Thompson’s shoulders slumped as he fell behind 0-3, 15-40 in the deciding set – a deficit that after the match he could not even recall.

Yet he produced some powerful first serves when he needed them to escape that hole and get on the board at 1-3, and after Thompson broke serve in the fifth game, Smith called for the trainer to attend to his knee.

His movement compromised, Smith still managed to keep his nose in front; with game’s going on serve, he moved ahead 4-3 and watched as Thompson collapsed to the court with his first episode of cramping.

With both men walking wounded, Thompson was the first to gain a seemingly decisive advantage, breaking serve in the ninth game and scoring an opportunity to serve for the match.

He was promptly broken to love.

He gained another opportunity when he broke serve to lead 7-6. And was subsequently broken at 15.

But it was in the very next game that Smith’s body almost completely gave way. It was gut-wrenching viewing as his leg almost completely locked up with cramps and immobilised him; after an extended time between points, he carried on, but double faulted to surrender his serve for a third time.

Leading 8-7, Thompson made no mistake on his third attempt to serve out the match, roaring in delight as Smith committed a final error.

“Even the last game was tight, but I think when he started taking a few more timeouts my cramps started to feel a bit better, so that helped me … I was trying to feed off it (when Smith cramped) because I knew I was feeling better than him,” the 20-year-old said.

“It means the world (to win), to play another home Grand Slam is amazing.”