Alex De Minaur and Jaimee Fourlis have scooped the boys' and girls' singles titles at the 16/u Australian Championships at Melbourne Park on Sunday. 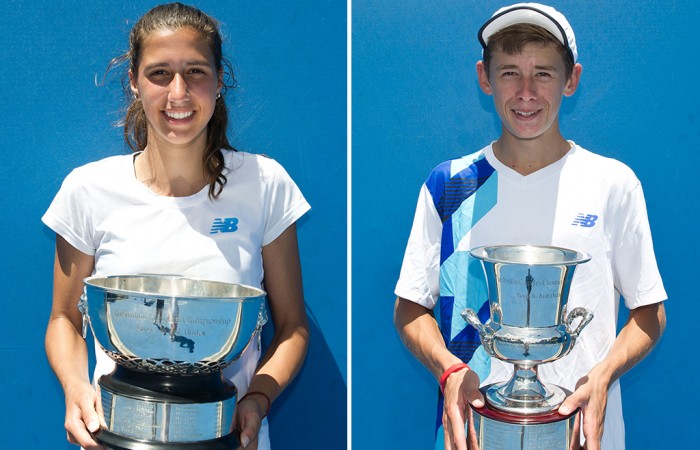 In the girls’ event, Melburnian and sixth seed Jaimee Fourlis came back from a set down to defeat her training partner Jeanette Lin 2-6 6-3 6-3.

“That definitely has to be the best game I’ve played all year,” said an elated De Minaur after winning 6-1 6-2.

“I felt like I was flying around the court. Could not miss a ball.

The 15-year-old’s keen court sense was on full display as he silenced the raw power of the Ellis game with his sweet hitting and accurate ball placement. In the end, double breaks in each set were more than enough to earn him the title and throughout the match, he never once relinquished his grip on proceedings.

De Minaur has been gaining in form and confidence every match this week in his first foray back to competitive play since an injury layoff. A slight change in serving technique to preserve his elbow also seems to have paid additional dividends with the freshly crowned 16s champion saying his serving might have even reached a new level.

“I’ve been serving real well this week,” he said. “Made a lot of first serves, and that’s the aspect of my game that’s struggled a little bit in the past.

“I wasn’t even sure I would play,” he said of his injury. “But since my elbow was OK, I just wanted to play good tennis.

“I was lucky to get through to the final and play a great match against Blake.”

Fourlis fights off a determined Lin to take 16s title

Meanwhile, Fourlis ended the hot streak of Lin, who during the December Showdown also won the 14/u Australian Championships and was part of the winning South Australian squad in the 14/u team event.

“It feels pretty good to win it,” said 15-year-old Fourlis. “I tried not to put any pressure on myself, but it’s hard not to, you know.

“I was pretty confident, but [Lin’s] had a really good week. She played really well and deserves a lot of credit.”

In the final, it all started with a rush for Lin. She eased through the first set looking the stronger player from the back of the court – Fourlis struggled a little with her ball toss and general composure – and seemed in a position to carry on her momentum.

However, a critical hold at 3-3 in the second set for Fourlis after a run of deuces seemed to turn her fortunes around, and she steeled herself to immediately break Lin and then level the match at a set apiece.

From that point on, Fourlis was the frontrunner. Her serve returned along with her confidence, and a tiring Lin seemed just short of the pace in general play.

Fourlis broke early for 3-1 in the final set, but to her credit, Lin made one final push to even the score.

It wasn’t enough though, as Fourlis continued to pour on the pressure, and a double fault from Lin handed her hard earned break directly back. From that point on, Fourlis never looked troubled, with a wide backhand from Lin eventually handing her the title.

“The first set was pretty shaky,” Fourlis said. “She got off to a really good start.

“I guess I kind of panicked a bit, but I contained myself and tried to relax from there.”

With the 16/u title now under her belt, Fourlis can look ahead to rest of the Australian summer with a growing confidence, including a berth in the Australian Open 2015 junior championships.

Later on Sunday at Melbourne Park, fifth seeds Christopher Cox and Matthew Romios secured victory in the boys’s doubles final with a 6-4 6-0 win over No.6 seeds Jie Dong and Brian Tran.

Fourth seeds Violet Apisah and Michaela Haet were crowned winners of the girls’ doubles tournament after they beat Alexandra Bozovic and Kaylah Mcphee 6-2 6-7(7) [10-3].