Poulos progresses to girls’ 12/u final

Third seed Annerly Poulos has beaten No.2 seed Monique Barry in a hard-hitting semifinal to take her place in the title match of the girls’ 12/u Australian Championships. 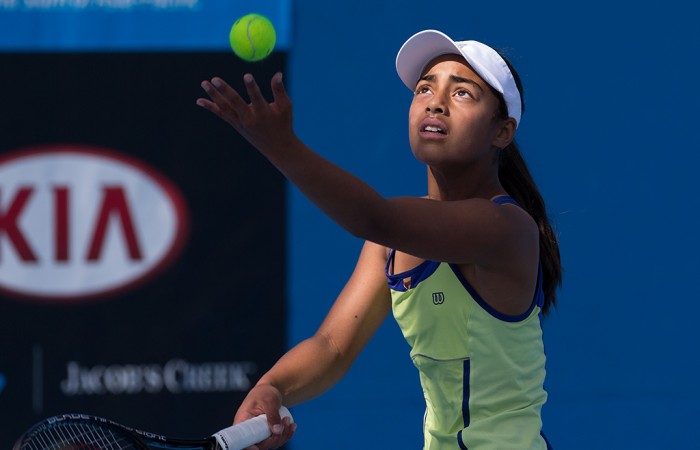 Third seed Annerly Poulos has beaten No.2 seed Monique Barry in a hard-hitting semifinal to take her place in the title match of the girls’ 12/u Australian Championships.

Poulos, who is yet to drop a set so far in the tournament, will in the final meet 11th seed Natasha Russell, who beat China’s Ming Qiao Yang 6-3 6-1 on Saturday.

Leading by a set and a break, Polous weathered a barrage of heavy groundstrokes from Barry, who plays in the mold of fellow West Australian Storm Sanders – left handed and with plenty of power.

But despite doing down 4-3 in the second set, Poulos was the more consistent of the pair and won a couple of tight games after lengthy battles at deuce, eventually securing victory 6-2 7-5.

“I’m really happy and really proud of myself (to be in the final) because all of the other Nationals I usually lose in like third round or get to the quarters and lose,” Poulos said.

“I have an opportunity to win this Nationals, and yeah, it’s going to be good.”

Despite requiring two attempts to serve out the match, Poulos made no mistake second time around, remaining rock-solid from the baseline and forcing Barry to go for too much.

“I’m (concentrating) on being composed, focused and consistent. And no matter what the result, just keep fighting until the end,” she said.

“She (Barry) is a really good player. I usually play her in Nationals, and this was probably the most challenging (match of the tournament for me) because everyone improves really quickly and it just gets harder and harder every time.”

In the boys’ event, No.2 seed Philip Sekulic will take on China’s Xiao Fei Wang.

Wang, the fourth seed, was too strong for seventh seed Casey Hoole of Queensland, winning 6-1 6-2.