Top seed Blake Ellis has saved three match points to reach the final of the boys’ 16/u Australian Championships, while Jeanette Lin recovered from a set and a break down to reach the girls' decider. 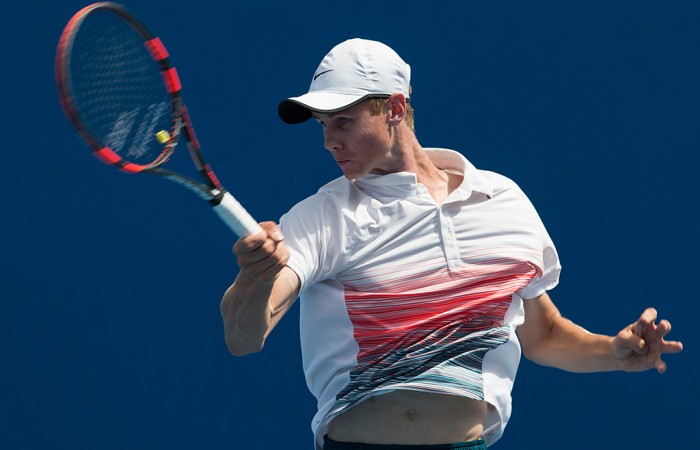 Top seed Blake Ellis has stared down three match points before recovering to advance to the final of the boys’ 16/u Australian Championships.

It was a similar come-from-behind victory for Jeanette Lin in the girls’ 16/u semifinals; she reached the final despite falling behind a set and a break to Aleksa Cveticanin.

Ellis defeated qualifier Jamie Fraser 2-6 7-6(3) 6-0, staving off a succession of match points in the 12th game of the third set with some dashing net play.

“We’ve been working on just being aggressive all the time, and thought why not do it match point down?” he said.

“If it works then that’s good, if it doesn’t then at least we’ve got something else to work on further.”

Earlier in the match, it had been Fraser’s power from the back of the court – especially off his potent forehand wing – that had successfully countered Ellis’s huge serve.

Despite being broken in the opening game of the match, the New South Welshman won five games in a row en route to taking the first set.

But those missed match points proved a disappointment too difficult to recover from.

Once the second set progressed to a tiebreak, Ellis dominated, racing ahead 6-1 as Fraser began to err. He would recover some ground before Ellis levelled at a set apiece, and would not win another game.

“He didn’t seem too down (mentally), but I just felt like I was on top of every point, and that hopefully it would be a quick (third) set and I could get the outcome,” Ellis said.

Meanwhile, Lin found herself down 6-3 3-0 against the rampaging Cveticanin before winning five of the next six games to wrest control of the second set.

“So then I was just really trying to think of something else (to do) because Lex was overpowering me, she was bigger, stronger, faster. So I tried to hit it softer in a way, so she had to create her own pace and I tried to mix it up a bit more.

Improving her consistency and attacking Cveticanin’s second serves with blistering returns, Lin eventually levelled the match at one set all.

She then romped through the third against her dispirited opponent to win 3-6 7-5 6-2.

Lin has dominated throughout the December Showdown, also winning the 14/u Australian Championships and being a part of the winning South Australian squad in the 14/u teams event.

She will attempt to cap her fortnight in style when she takes on sixth seed Jaimee Fourlis in the final; Fourlis beat No.4 seed Michaela Haet 6-2 6-3.

“(Fourlis) is one of my best friends, we train together a lot,” Lin said.

“We’re all from the Melbourne Academy … it will be interesting actually. Everything’s tougher (playing a friend).”