It was a day of upsets for both the girls and the boys in the 16/u Australian Championships, with Jaimee Fourlis and Moerani Bouzige both recording stunning wins against higher-ranked opponents. 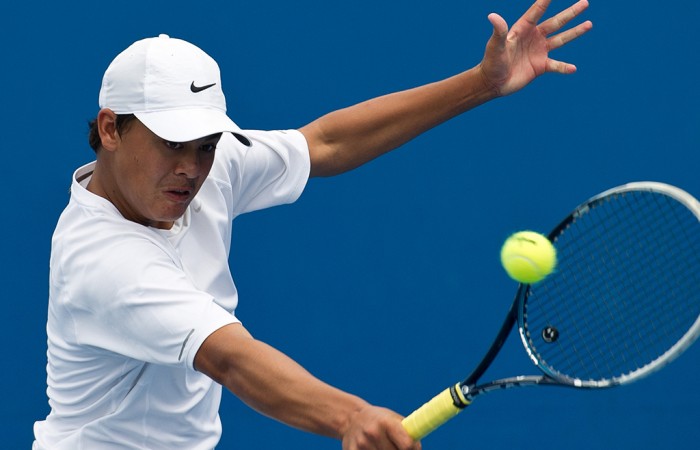 It was a day of upsets for both the girls and the boys in the 16/u Australian Championships, with Jaimee Fourlis and Moerani Bouzige both recording stunning wins against higher-ranked opponents.

It was never going to be easy for Jaimee Fourlis, facing off against Petra Hule, her travel buddy and best friend, but composure and the ability to pinpoint her opponents weaknesses helped her to a 6-3 6-2 win.

The two girls play a similar, hard-hitting brand of tennis, which made it difficult for either player to take complete control, but it was Fourlis who seized the initiative midway through the first set to change up the pace of the match and throw top-seeded Hule off guard.

In addition, a high first serve percentage allowed Fourlis to dictate the majority of points and base her attack around her lethal groundstrokes.

“We’ve travelled together a lot and pretty much know each others games, so just playing my game and attacking her weaknesses is important,” said Fourlis.

After the December Showdown, Fourlis is hopeful that her ranking improves so to allow her to compete in the Australian Open junior tournament.

Michaela Haet, Jeanette Lin and Aleksa Cveticanin will join Fourlis in the semifinals.

In perhaps one of the most dramatic matches of the tournament, unseeded, and largely unheralded Queenslander Moerani Bouzige defeated second seed Brian Tran 7-6(3) 4-6 7-6(3).

In a match lasting longer than two-and-a-half hours, 15-year-old Bouzige demonstrated his impressive repertoire of shots. Highly explosive from the back of the court, he was also very comfortable moving into the net behind his effective sliced shots.

After clinching the first set, Tran demonstrated some serious resistance by slowing down the pace of the match and focusing on his consistency. While this threated to derail Bouzige, the Queenslander was able to contain his emotions and continue playing the role of the aggressor – much to his benefit.

“I stuck to my game plan and just focused on what I had to do,” said a relieved Bouzige.

Also progressing to the semifinals of the boys’ tournament are Blake Ellis, Jamie Fraser and Alex De Minaur.

Smooth passage for top seeds in 12/u events

The top seeds in the 12/u Australian Championships continued to impress, with third seeds in the boys’ and girls’ tournaments, Enzo Aguiard and Annerly Poulous respectively, both advancing to the semifinals.

Aguiard was forced to dig deep, especially in the final stages of the match against sixth seed Liam Franklin who created a few problems for Aguiard with his excellent net game.

“I tried to keep the ball deep so he couldn’t come to the net and attack like he likes to,” said the No.3 seed.

With Franklin raising his level and converting more of his chances as the match drew to a close, Aguiard utilised his superior athleticism and defensive skills to keep the pressure on Franklin.

Also moving through to the semifinals is Philip Sekulic – whose heavy forehand was too much for Christian Waked – China’s Xiao Fei Wang, and Casey Hoole who upset top seed Alex Bulte.

Poulous, who in her previous three matches had lost a combined total of just two games, continued her strong form, scoring a 6-2 6-4 win over Caitlyn Portela.

With both players demonstrating strong baselines games, it was Poulous who was able to stay focused and minimise her errors throughout the match.

“I have a little routine, where after every point I walk to the back of the court, take a deep breath and think about what I should do in the next point,” she said.

Poulous is joined in the final four of the 12/u girls’ draw by Natasha Russell, Ming Qiao Yang and Monique Barry.