The December Showdown has taken on a distinctly international feel in 2014, providing a competitive boost for Australian athletes as well as for the players arriving on our shores. 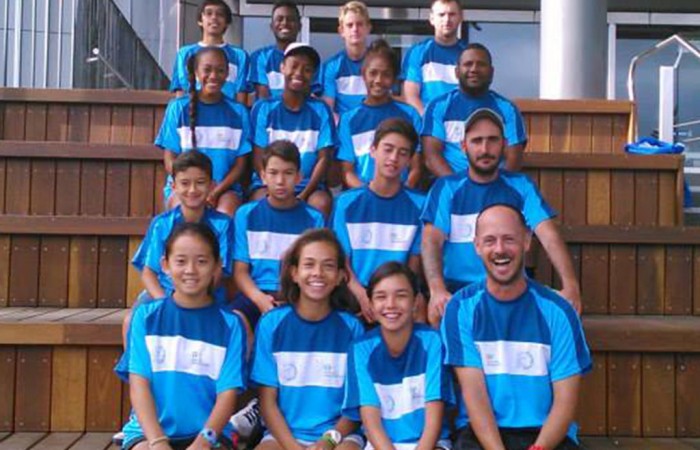 Casting an eye across the blue Plexicushion courts during the December Showdown, there is a decidedly international feel to the proceedings.

New Zealander Macsen Sisam clinched the boys’ 14/u Australian Championships title, while just a few days later, Japan and China went head to head in the final of the boys’ 12/u teams championships. Throughout the Showdown, the touring team from Pacific Oceania (POC) has been easy to spot thanks to its blue International Tennis Federation (ITF) outfits.

While the bulk of competitors – and champions – at Melbourne Park this December have hailed from Australia, this injection of international talent has helped increase both the standard of the competition and bolster its recognition on the world stage.

> find out more about the December Showdown

“We’ve wanted to grow the event into Asia, so that’s where Japan (and China have come in). We had Hong Kong last year, and I’ve had some discussions with Korea and India … hopefully in the future we can maybe get a few more of the Asian countries to compete,” explained tournament director Francis Soyer.

“I guess the idea behind it was to grow the event into something that’s got worldwide recognition in terms of the level of Orange Bowl … they’ve got 50 or 60 years head start on us but I think over time and start small with the Asian region and built up some momentum there, who knows what it could grow into?”

Players from other nations outside of Australia have mainly competed in the 12/u and 14/u events at Melbourne Park, with Kiwi Nina Paripovich the lone international in action in the 16s.

For the Australian juniors, the opportunity to compete against international opponents has proven an invaluable experience. Given many of these athletes may not get to experience an international junior tour, having a global standard of competition available in their backyard is integral to their development.

According to Soyer, Japan and New Zealand in particular have fielded strong teams, serving to further improve the experience for Australian competitors.

“Certainly Japan brought out their best 13-year-old team last week to the 14s (event) and the New Zealand team is obviously very strong – their No.1 player won our 14s Nationals,” he said.

“It’s good to see the competition on our home turf for our players, and not just the players that go over to Europe during the year, but the kids who are staying here … they get to experience the opportunity to play an international player as well.

“Hopefully they make some friends and set up some long-term friendships, and (if that fosters) opportunities to travel to Japan and New Zealand and the other countries we’ve set up (relationships with), that’s a bonus.”

The experience is certainly proving a valuable one for the Pacific Oceania team as well.

The squad of 12 athletes – accompanied by two coaches and tour manager Darran Wrighton – is supported by funding from the ITF’s Grand Slam development fund, which contributes to travel, accommodation and food costs.

Juniors from this region qualify for the touring program by virtue of their performances in August’s Pacific Oceania Junior Championships; across the course of 12 months, the touring program provides several opportunities for POC athletes to gain international travel and competitive experience, one of which is in Melbourne at the December Showdown.

Wrighton believes the Showdown is especially valuable for the juniors in his region because it is contested on Plexicushion.

“We need to be more specific to hard courts, because the end aim for these kids eventually is to get ITF points; ITF events in the Pacific are played on hard courts, so we need to keep them playing on those surfaces,” he explained.

“For me what makes the (touring) experience special is that I’m seeing it through their eyes … when they came and saw the courts, they couldn’t believe they’re actually playing on the Australian Open courts.

“And winning some matches – again it keeps coming back to the thing that we are now producing players to the level that can compete toe-to-toe. We might not be in that (Australian) top 20 (level), but top 30 to 40 in the whole of Australia is pretty significant.

“If we were going to increase the competitive opportunities for Pacific players, I think we can improve on that.”