Congratulations to Finn Chandler, our December Hot Shot of the Month! 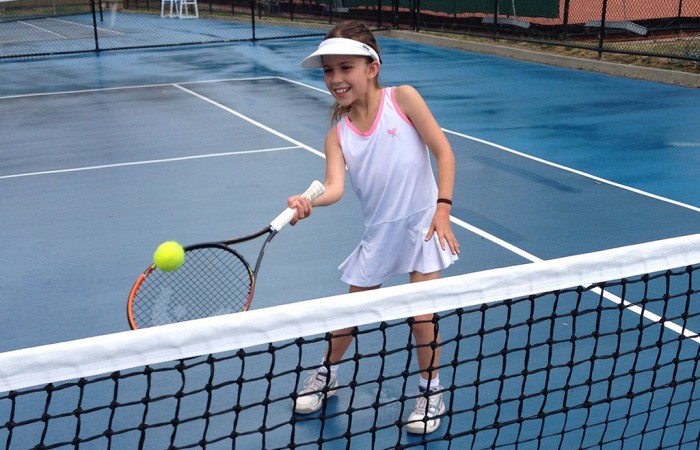 What do you like about playing tennis?
I love the feeling of hitting the ball cleanly. I love that you can play with friends and it’s a great way to make new friends.

What is your favourite shot and why?
Probably forehand because it’s the shot I can hit with the most power. I also like to trick my opponent with a sneaky little drop shot.

Who do you like playing tennis with?
I love playing with my friend Milla. We never miss a lesson together. I also like playing against my new tennis friends Amy, Macey and Bridget because we are all evenly matched and have good rallies with lots of deuce points and tie breakers!

Do you have a favourite tennis player?
I don’t have one favourite player in particular. I like Roger Federer, Rafael Nadal, Sam Stosur and Serena Williams. It was fun getting up in the middle of the night to watch Nick Kyrgios play so well at Wimbledon this year. I wish I could have seen Justine Henin play because she is small like me.

Do you have any tennis goals?
I really just want to keep playing tennis and be the best player I can be. It would be amazing to become a professional player and coach one day. My goal for next year is to represent my school.

What is your favourite tennis memory? Have you attended any tournaments?
I have played in a few tournaments this year. My favourite memory was making the top four in our local 10/u championship. I got thrashed in the semis by the eventual champion but hopefully I can go one better next year!  I was also lucky enough to go to the kid’s tennis day at the Australian Open earlier this year with my family. I got to see Federer, Nadal and Raonic practicing. I couldn’t believe how hard they hit the ball!

How does it feel to be nominated for the Tennis Hot Shot of the Year award?
It feels extremely exciting! I feel lucky to be the December nominee because I don’t think I could contain my excitement for more than a month! I feel very honored and am grateful for such an amazing opportunity.