Olivia gets physical as 18s semis go the distance

A pair of thrilling semifinals on Friday have ended with Olivia Tjandramulia and Maddison Inglis advancing to the final of the girls' 18/u Australian Championships. 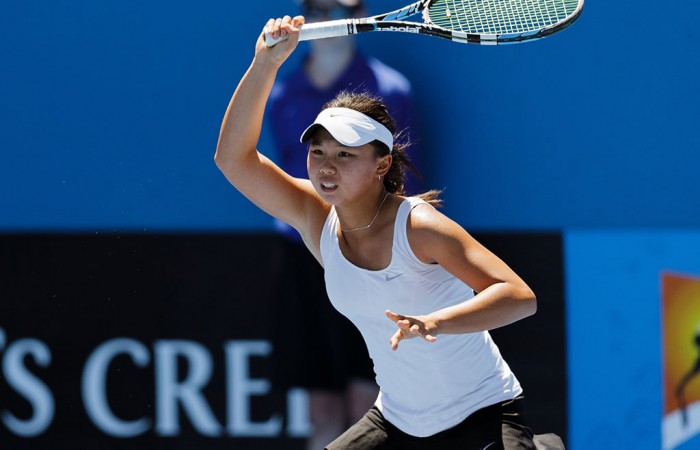 Glorious sunshine at Melbourne Park was the backdrop for a pair of thrilling semifinals in the girls’ 18/u Australian Championships on Friday with Olivia Tjandramulia providing the upset of the day in overcoming top seed and fellow Queenslander Kimberly Birrell.

In a gruelling encounter, the third-seeded Tjandramulia triumphed 4-6 6-1 7-6(5) in two-and-a-half hours.

Simultaneously on the adjacent court, a final set decider was also being played out, this one between West Australian second seed Maddison Inglis and another Queenslander in fifth seed Lizette Cabrera. In this case, it was the higher seed, Inglis, who managed to get the job done, winning 6-3 4-6 7-6(3).

With her precise hitting from the back of the court, 17-year-old Tjandramulia always looked the frontrunner in her match with Birrell – who is a year younger – but in relinquishing the lead on several occasions, she gave the top seed enough opportunities to stay in the match.

A 3-0 lead to Tjandramulia in the opening set was not enough to secure it, and Birrell stormed back to take it 6-4. However, Tjandramulia was able to capitalise on a similar start in the second, this time maintaining her lead to take the set 6-1 and level proceedings.

The final set began in the same fashion with Tjandramulia continuing to pile on the pressure, pushing out to a 5-3 lead and looking very much in charge. She was left to rue a missed match point chance as Birrell scrapped her way to 6-6.

The final set tiebreaker brought out the best tennis of the match with both players red-lining their game and providing onlookers with a real treat. In the end, a scorching forehand from Tjandramulia found the line and saw her into the final on Saturday.

“Kimberly is a really good player who just never gives up,” Tjandramulia said. “She hits the ball very cleanly so I had to just hang in there.

“But I was quite happy with my form. I did get a bit of tightness in the first and third set which made it pretty close.

“Hopefully that won’t happen again [in the final] tomorrow.”

Meanwhile, 16-year-old Inglis was made to work for every point against the talented Cabrera.

After splitting the first two sets and reaching 5-5 in the decider – which included a missed match point opportunity for Inglis – the second seed managed to hold her serve after what seemed an endless run of game point opportunities for both players.

Cabrera was quick to reply, sending the match into a final set tiebreaker, however, it was Inglis who had control from that point, taking an early lead in the breaker and never looking back.

“I played my game and that was good because it worked and I got through,” Inglis said.

The reigning 18/u Australian champion feels her game has improved since she captured the title last year.

“I’ve worked a bit on my serve, my legs and staying low,” she said. “And that sort of showed today against [Cabrera] because she keeps the ball pretty flat.”