Petra Hule has produced the upset of the day in the 18/u Australian Championships at Melbourne Park on Tuesday, recovering to defeat top seed Kimberly Birrell. 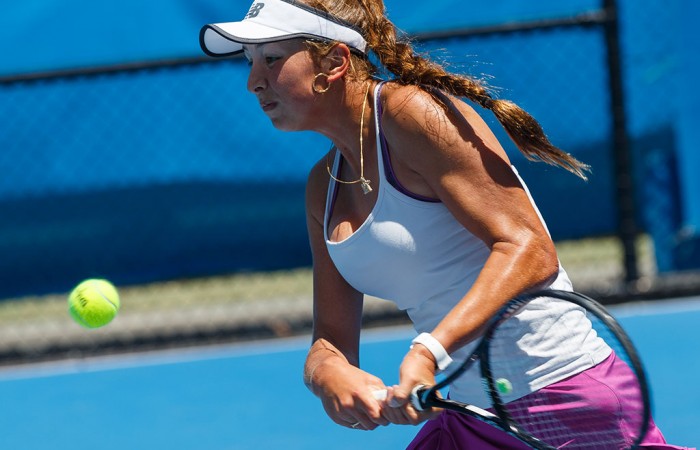 South Australian 15-year-old Petra Hule has produced the upset of the day in the round robin stage of the 18/u Australian Championships at Melbourne Park on Tuesday, coming from a set behind to defeat top seeded Queenslander Kimberly Birrell 3-6 6-4 6-2.

Under perfect blue skies, the match was a high quality affair with both players appearing to have the upper hand at various stages.

It was 16-year-old Birrell that started the better, taking a 4-1 lead in the opening set before Hule, the seventh seed, began to make her mark.

Birrell managed to hold on and take the first set but Hule then rushed out to a 4-0 lead in the second before being made to work hard to even the score at a set apiece.

In the deciding set it was Hule who lifted her level once again with some scintillating tennis, breaking the top seed early and carrying the momentum throughout to claim the upset victory.

“I started off a bit rough and she played pretty good,” Hule said.

“But towards the end of the first set and throughout the second and third I got my mojo and started to play more aggressive and more consistent.”

In terms of taking on the tournament’s top seed, Hule said she tried not to think about it too much.

“I just played my game … and it worked,” she said.

The unseeded Queenslander always appeared to have Guccione’s measure, feeding off the Victorian’s power game and keeping him under constant pressure.

“I was feeling good out there,” Jaede said.

“I knew he had a big game so it was going to be kind of hard to hit him off the court. So I just tried to absorb his pace and get it back deep.”

Restoring some order to proceedings were No.1 and No.2 seeds Harry Bourchier and Marc Polmans respectively, who each won their second round-robin matches in straight sets.

On Tuesday in the 14/u boys event, No.1 seed Stefan Norodom fell in three sets to unseeded Adam O’Shannessy.

Having been stretched to three sets in his two previous matches, Norodom was unable to find his way out of trouble in the quarterfinals, falling 2-6 6-3 6-4.

Meanwhile, up-and-coming Queenslander Alexander Crnokrak has made his way to the semifinal after getting past sixth seed Sam May 6-7(6) 6-2 6-2.

The third seed was made to work hard with the young South Australian taking an early advantage as the players started the match feeling each other out from the back of the court. The first set tiebreak was a highlight with Crnokrak saving five consecutive set points before finally succumbing.

Yet from that point, Crnokrak stepped up his game, using his effortless power and movement to continually create opportunities. The toll was eventually too much for May who battled valiantly but was clearly tiring towards the end.

“I started to play more aggressively after the first set as the other way just wasn’t working,” Crnokrak said.

“But it was tough, he played really well and I just had to fight every point.”

In girls’ 14/u action, top seed Jeanette Lin continued her relentless march through the draw, beating No.8 seed Kaitlin Staines 6-2 6-4 to advance to the semifinals; she has dropped just 13 games in four matches to date.

She was joined in the final four by the in-form No.3 seed Violet Apisah, who defeated sixth seed Selina Turulja 6-0 6-1.