Top seed Harry Bourchier has won his first match of the 18/u Australian Championships, putting on a strong serving display to overcome Jack Thiessen. 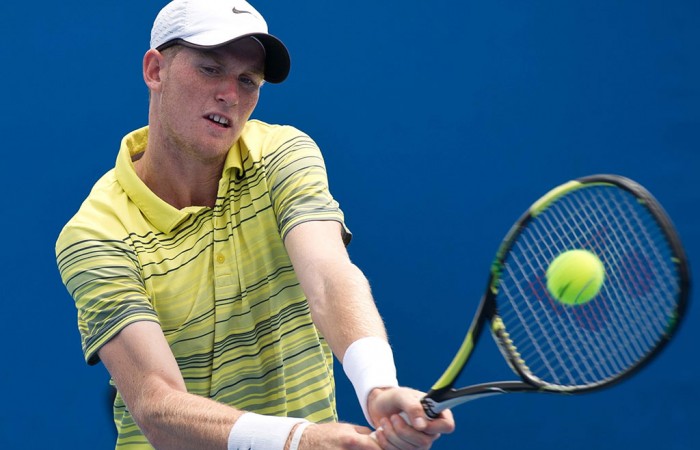 Tasmanian No.1 seed Harry Bourchier has won his first match of the 18/u Australian Championships, putting on a strong serving display to overcome Jack Thiessen 6-4 6-1.

Thiessen was on the back foot right from the start as Bourchier broke early in the match and while it was the only successful break of the first set, Thiessen was unable to make any headway on the Bourchier serve and consistently surrendered break points himself.

Thiessen had several break point opportunities at 4-1 down in the second set but was unable to convert and from there Bourchier sailed to a convincing victory.

Bourchier was pleased with his performance but acknowledged the fact that the competition is still young.

“I’m just going to take it one match at a time, there’s six matches to win it, so you’ve got to focus everyday and take each day as it comes,” he said.

Other results in the boys’ 18/u event saw wins for No.2 seed Marc Polmans, third seed Daniel Guccione and Daniel Nolan, the fourth seed.

In similar circumstances to Bourchier, girls No.2 seed Maddison Inglis had little trouble in her 6-3 6-3 defeat of Queensland qualifier Alicia Smith.

Inglis broke to take the first set and while Smith broke in the first game of the second set, Inglis rallied to win six of the last seven games to set herself up well for her second match of the round robin competition.

Smith had the superior groundstroke and serving power of the contest but lacked the consistency, committing more unforced errors and double faults than her more fancied opponent.

Inglis’ ability to keep the ball in play was the story of the match and because they had not faced each other in the past, Inglis was especially relieved to get the win.

“I’ve never played her before so I didn’t really know what to expect but I just went and played my game and it worked,” she said.

Consistency was Inglis’ biggest strength today and it remains her primary focus going into her second match against No.8 seed Chloe Hule.

“I think I changed my game a bit in the first few games of the second set but I’ve just got to keep it the same the whole way,” she said.

As the 18/u competition got underway on Monday, the 14/u Australian Championships entered its third day of competition.

The feature match of the day pitted the highly-fancied seventh and ninth seeds – Dane Sweeny and Rinky Hijikata respectively – against one another in what was the tightest boy’s match of the day.

After taking the first set, Sweeny went down 3-0 in the second before bringing it back to 5-4.

Serving for the second set was more difficult than anticipated for Hijikata, as Sweeny came within a whisker of levelling the contest at 5-5, but Hijikata settled and secured the second set 6-4.

Also going down in a surprise result was second seed Sean Van Rensburg, who fell 7-6(3) 6-3 to the unseeded Thomas Bosancic.

In the girls’ event, top seed Jeanette Lin and fourth seed Ella Husrefovic enjoyed smooth progression through to the quarterfinals; they were joined by No.3 seed Violet Apisah, who overcame the powerful Olivia Gadecki in three sets.

Second seed Daniela Kovacevic was the highest seeded player to fall on Monday, going down 7-5 4-6 6-1 to 16th seed Nina Paripovich.