Dellacqua set to star in Hobart

Australian favourite Casey Dellacqua will return to Tasmania to star at the Hobart International in 2015 from 11-17 January at the Domain Tennis Centre. 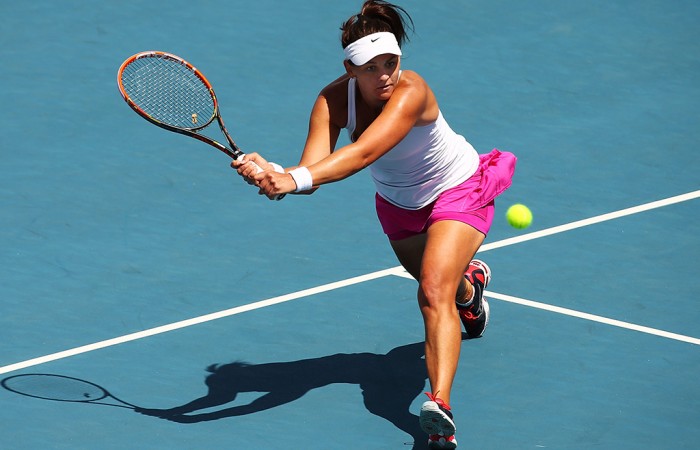 Australian favourite Casey Dellacqua will return to Tasmania to star at the Hobart International in 2015 from 11-17 January at the Domain Tennis Centre.

Dellacqua has just completed a career best season making her debut in the world’s top 30. The left-hander started 2014 at world No.142 before her rapid rise up the ranks to reach a career high of No.26 in September.

Throughout the season she has posted wins over higher-ranked opponents such as compatriot Sam Stosur as well as Sabine Lisicki, Anastasia Pavlyuchenkova, Kirsten Flipkens and Roberta Vinci.

The West Australian has capped off a stellar year after being named a finalist for the Newcombe Medal, Australian tennis’ highest honour presented to the most outstanding player of the season, and WTA’s Most Improved Player.

Dellacqua couldn’t be happier to have chosen Hobart to finalise her preparations before the first Grand Slam of the year.

“Hobart is the perfect way to ensure I’m match ready for the Australian Open,” said Dellacqua, who was in Hobart today to help officially launch the tournament.

“I always enjoy playing in Hobart and love playing for the local crowds. The Domain Tennis Centre is a beautiful place to compete, overlooking the Derwent River.

“Mark and his team put on a great event each year and make the playing group feel very welcome.”

Premier of Tasmania, Will Hodgman, is looking forward to welcoming Dellacqua back to Tasmania this summer.

“To draw the likes of Australian tennis star Casey Dellacqua to the Hobart International is a testament to the event, the organisers and our state,” Hodgman said.

“Tasmanians love their sport and the Hobart International offers an incredible chance to watch world class tennis in our own backyard.

“I am sure Tasmanians will strongly support this event to ensure it continues to grow and cement our place on the circuit as one of the best boutique tournaments in the country.”

Tournament Director and Executive Director of Tennis Tasmania, Mark Handley, is also thrilled to have one of Australia’s elite confirmed for next year’s event.

“We’re excited to welcome Casey back to Hobart,” Handley said.

“As one of Australia’s top female players, the Tasmanian sporting community know Casey well and look forward to supporting her on court when she returns to play here in January.

“The Hobart International has a strong history of launching the international careers of players. We strive to improve the event each year and focus on providing our local sporting fans with a world class fan experience and the opportunity to get up close to the action.”

In her 13th season on the WTA Tour 29-year-old Dellacqua made fourth round appearances at both her home slam at the Australian Open and at the US Open.

She posted her best ever WTA result reaching the semifinals at the Premier-level tournament in Birmingham, quarterfinal appearances at Indian Wells and Tokyo whilst also representing Australia in Fed Cup against Russia in Hobart and her first Fed Cup semifinal against Germany.

On Saturday 10 January SpongeBob SquarePants and Squidward, along with their Nick Jr. friends Dora the Explorer and Diego will headline Hobart International Kids Tennis Day presented by Nickelodeon. Entry is free.

For all tournament information please visit hobartinternational.com.au and stay up to date with tournament news via facebook and Twitter.