Eighteen-year-old Harry Bourchier has upset second seed Di Wu from China in straight sets in the second round of the 2014 Tennis Wollongong Centenary International on Thursday. 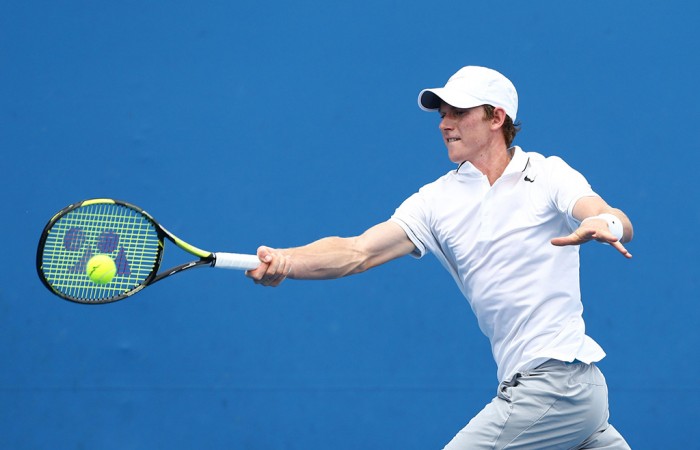 Eighteen-year-old Harry Bourchier has upset second seed Di Wu from China in straight sets, 7-5 6-1, in the second round of the 2014 Tennis Wollongong Centenary International on Thursday.

It was an emphatic win by the unseeded Tasmanian, who dropped just a single game after a close fought opening set in which pair stood at 5-5 before Bourchier was able to affect the break and run away with the match.

“Conditions were pretty unstable,” Bourchier said. “I found it quite tough to get into the match in the beginning but I stuck with him.

“After I got the first set, I was able to keep the roll going, break early in the second and then kind of take it apart.”

For Bourchier, five years younger than his opponent and ranked nearly 600 places lower, this is a highly encouraging win.

Wu has earned a wildcard entry into the Australian Open after winning the Asia-Pacific Australian Open Wildcard Play-off for the past two years and has registered wins over a number of players inside the top 100.

“It’s definitely a good win,” Bourchier said. “I just played my game and it shows where my level is at the moment.”

Bourchier has recently been plying his trade on the ITF Futures Circuit in Canada and also appeared in qualifying at Californian ATP Challengers in Tiburon and Sacramento.

He also notched up two solid wins in qualifying last week in Traralgon, before having to retire in the final round due to illness.

Now into the quarterfinals, Bourchier will face 21-year-old Melburnian Andrew Wittington, a three-set winner on Thursday over another of the Chinese contingent, Chuhan Wang.

The two have never previously met.

Maverick Banes and Matthew Barton will round out the Australians in quarterfinal action with the two facing off on Friday.