McEnroe to take on Rafter in Sydney

Tennis legends John McEnroe and Pat Rafter will do battle in the Sydney Men's Legends events at the Apia International in 2015. 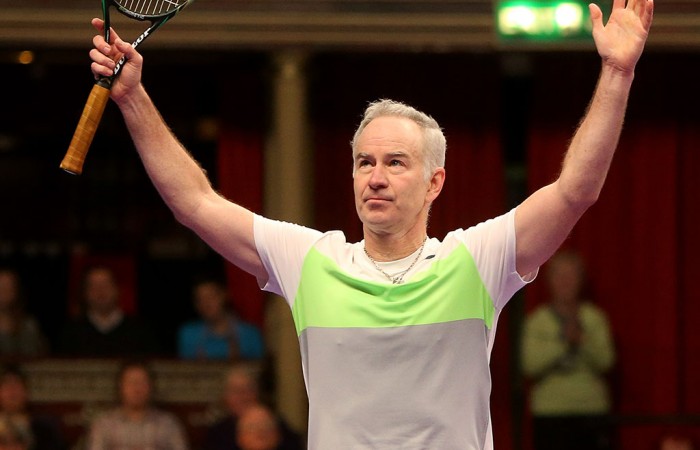 One of the most iconic tennis players in the world, 17 time Grand Slam champion John McEnroe, is set to take on Australian Davis Cup Captain and fellow Hall of Famer Pat Rafter in the Sydney Men’s Legends event as part of Apia International Sydney 2015.

The two tennis legends will play an exhibition match as the curtain-raiser to the men’s singles final on Saturday 17 January at Ken Rosewall Arena, Sydney Olympic Park Tennis Centre.

Between them, Rafter and McEnroe hold nine Grand Slam singles titles, 11 Grand Slam doubles titles and 88 ATP World Tour titles. While the pair never met during their professional careers, they have developed a strong rivalry on the ATP Champions Tour.

At 55-years-old, McEnroe is aware the physical challenge of playing the younger Rafter will be tough, but 20-plus years of retirement have done little to dampen his competitive nature.

“I work out pretty much every day. I like it more than I did when I was No. 1 in the world. I don’t know if I can bridge this gap quite enough with Patrick Rafter, he’s still in fantastic shape, I think I’m giving up 14 years so that’s going to be a tall order,” said McEnroe on radio 2GB this morning.

“I don’t hate losing as much but I do hate it still. People say are you competitive? Yes, I’m competitive, not as competitive as when I was losing at Wimbledon or the Australian [Open] or the US [Open]. I have a slightly better perspective at 55 but I’ve noticed over the years that winning is a lot better than losing.”

His firey personality on court is something Rafter is well aware of and the Australian great says he is still as passionate as ever.

“He is one of the greatest guys to play on the Legends Tour. Not only was he my idol, but he’s someone i’ve played quite a few times now and he’s someone who always gives it 100 percent,” said 41-year-old Rafter.

“He still gets crazy and he is still incredibly passionate about playing tennis. I have a lot of respect for him when we play against each other. He’s got me once before and I’ll try not to let that ever happen again.”

While he never competed in the Sydney International or NSW Open, McEnroe has a happy history with Sydney, winning four consecutive Sydney Indoor titles from 1980 to 1983. Rafter competed in what is now the Apia International Sydney three times, with his best result a semifinal loss to Tim Henman in 1998.

The four will play exhibition matches from 13-15 January on a special Legends Showcourt, meaning everyone with a $15 Ground Pass will be able to see the former greats in action. Rafter singled out Leconte and Bahrami as two of the most entertaining players on the Legends circuit.

“If I was to put an event on, these are the two guys that I would have at any exhibition event. Leconte and Bahrami have so much personality, they’ll make you laugh and they’ll show you some exceptional tennis shots. It’s all about entertainment out there and as a spectator you do not want to miss these guys playing.”

Tournament Director Alistair MacDonald said securing McEnroe, Rafter and the Legends Event for the Apia International Sydney 2015 would add an extra element to the fan experience.

“John McEnroe is one of the most renowned personalities not just in tennis, but in sport as a whole. He is passionate on and off the court and is still an incredibly gifted tennis player. To have him play Pat in the lead-up to our men’s final is incredibly exciting for us,” he said.

“Add to that three days of Legends tennis with Leconte, Bahrami, Santoro and of course Pat Cash and you have an experience you simply can’t get at a lot of tournaments and one that can be enjoyed by anyone who walks through our gates.”