Zuzana Zlochova: against all odds

As Zuzana Zlochova knows, success doesn't always lie solely on her own shoulders; her coach will assist her as she kicks off her campaign at the Bendigo Tennis International #2. 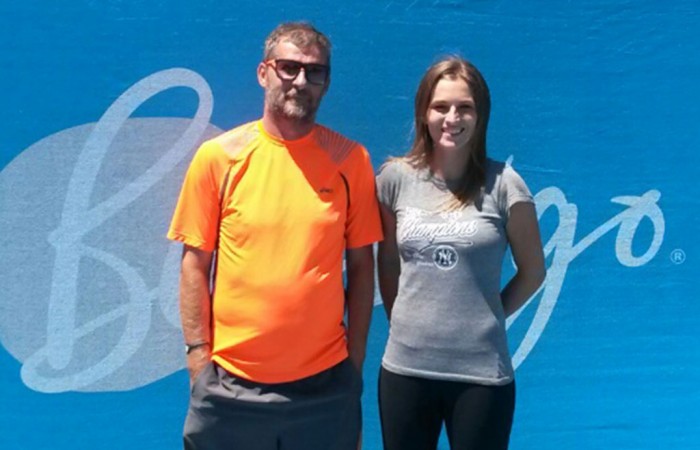 A player’s success doesn’t lie solely on their shoulders. There is a whole lot more to it than that. Aside from talent and hard work, a player needs a coach, sponsorship, help from their federation and then perhaps a few lucky bounces of the ball in their favour.

Zuzana Zlochova, ranked No.302 and from Slovakia, seems to be doing a lot of the work on her own, the hard way. Despite 12 career titles, charisma and an all-court game, she is still fighting for some sort of assistance.

“No help from racquet sponsors, no help from the federation, no handouts, no wildcards,” she says.

Her schedule is funded purely by tournament money. The winnings from ITF events are used to provide her with further travel and support needed for upcoming events – food, accommodation, racquets, stringing, clothing. The list is exhaustive.

Still, she travels the world beating players ranked both above and below her, players who have been given the advantages she so surely needs.

The 24-year old, who relishes travel and with experiences beyond her years, seems very at home in Australia. She has travelled the country extensively, and could tell you more about what each state has to offer than the majority of natives. Last year was an adventure by campervan. This year it is a Mondeo. She doesn’t stay in any particular town too long, as she follows the trial of ranking points and dreams.

“I like Australia more than anywhere. The country is so huge, the people are always really nice and the weather is great. Sometimes it is tough because we are travelling with no [phone] signal, and I need to tell my mother how I am doing each day.” Zlochova explains, before elaborating of her travels last year, including stops in Mildura, Port Pirie, Salisbury, Launceston, Burnie, Margaret River, Cairns, Toowoomba and finally Bendigo, where she competes again this year.

Fighting for her, every step of the way, is her coach of seven years, Jozef Kraus. At the beginning of this stint he helped a group of girls, but as time has progressed the group has decreased with life and university commitments leaving Zlochova as the only one who remains.

Josef’s duties are divided between that of manager, coach, chauffeur and friend.

“He will study the hours working out the schedule. He will then come back to me and say we are going here here and here.” Zlochova divulges as Jozef exhibits multiple detailed calendars, every week planned for tournaments, workouts and travel.

Acknowledges Kraus: “One of the major reason we like the tournaments in America and Australia is because they always have a good physio, who knows what they are doing, waiting for the players. They tournaments are well run. It makes you want to come back. If Zuzana is happy I am happy.”

Clearly her coach of seven years is an unyielding force of positive energy that not only watches his protégé’s development attentively but can also see the potential that lies within.

Unlike some of his contemporaries he doesn’t see a need to overcomplicate issues. “Paralysis by analysis is too common,” he says.

“Too many coaches are evaluating a shot three minutes before a player takes the court. The brain can’t deal with this.”

“Sport is not like mathematics. If you do this and this and that it does not always equal what you want. Sometimes you have to step away to focus,” Kraus explains, when talking about Zlochova’s success and brief vacation before her triumph in the $15,000 Melbourne event in April.

An astute man with greying stubble and Ryan Gosling sunglasses, Kraus has developed a range of knowledge and experiences through basketball and physical education.

Despite the challenges, Zlochova’s determination is unwavering and her enthusiasm for the game is impressive.

“I love tennis, and I want to be the best player I can be,” she says.

“The travel, the training, the matches, the non-stop schedule – it’s tough but I love tennis”.

It’s a simple formula. And in spite of the drawbacks she soldiers on, grinding through matches and the tour, still smiling, treating her disadvantages as a mere inconvenience.

Zuzana Zlochova plays her second first round match the Bendigo International on Tuesday.