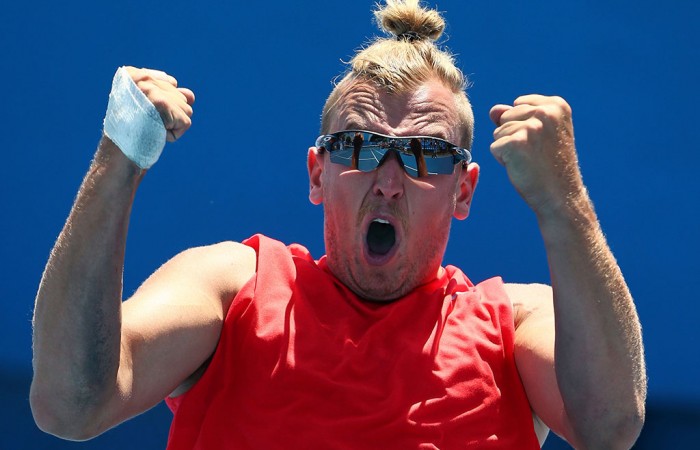 Dylan Alcott OAM, wheelchair tennis ace and Paralympic gold medallist, is preparing for the longest tennis match of his career.

“I’ve decided to go for a 24-hour world record of wheelchair tennis. It’s a pretty ridiculous idea to be honest,” Alcott announced today.

The 23-year-old Victorian will commence his 24-hour attempt at Melbourne Park on Thursday 11 December, with a line-up of celebrities – including tennis young gun Nick Kyrgios, basketball star Elizabeth Cambage, actress Olympia Valance, and AFL players Jack Watts and Tom Hawkins – as well as family members and fans set to join him on court to complete the challenge.

Alcott hopes to raise awareness for two charities that supported him as a child, when he endured countless operations and visits to hospital to treat a rare type of tumour wrapped around his spinal cord.

“When I was 10 years old I spent the first six months of the year bedridden after complications during surgery,” Alcott said.

“Depressed and upset, the Starlight Foundation came to my rescue and granted my family and me a wish to swim with the dolphins at Sea World on the Gold Coast. It was a truly once in a lifetime experience.

“Variety – the Children’s Charity, a charity for kids with disabilities, saw me using a borrowed tennis wheelchair that didn’t fit me, so they raised the money to get me a new one. Without them I don’t think I would be the Paralympic gold medallist that I am today.”

The wheelchair tennis ace, who remains passionate about both charities, came up with the idea for the 24-hour charity tennis challenge while driving past Melbourne’s National Tennis Centre and set himself a goal to raise $100,000 for the two causes.

The money raised will help Australian children living with illness or disability to achieve their goals and help to improve their quality of life.

“Having a disability can be very hard, especially for kids growing up, as I experienced first-hand. These donations will assist in granting wishes for sick children and purchasing equipment such as wheelchairs to enable them to live better lives,” Alcott said.

“Twenty-four hours, I don’t know how I’m going to do it, but I’ve always wanted to give back to these charities that helped my family and me so much when I was a kid,” Alcott said.

“I think the challenge will be a great thing for people with disabilities, and for people who don’t know much about wheelchair tennis. I think it’s a barrier-breaker. It’s an extreme way, but a good way to catch the public’s eye so they can see what we do and how we do it.”

Alcott’s tennis marathon will start at midday on Thursday 11 December and continue until midday on Friday 12 December at Melbourne Park.

Alcott encouraged the general public to get involved, regardless of their tennis ability.

“Come and try wheelchair tennis or come and play me on your feet, it doesn’t matter. Come down and have a hit,” he said.

A member of Australia’s gold medal-winning “Rollers” wheelchair basketball team at the Beijing Paralympic Games in 2008, Alcott has since returned his focus to his first love of tennis. Currently ranked No.4 in the world in the quad division for wheelchair tennis, Alcott has had a stellar year on the world tour with title wins at both the British and Belgium Opens.