Daria Gavrilova, originally from Russia, is the freshest face on the Australian tennis scene and is adding even more firepower to the nation's proud tennis arsenal. 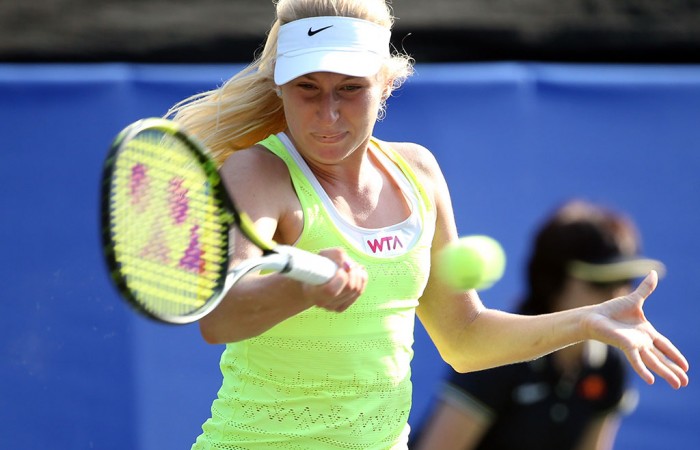 Daria Gavrilova, originally from Russia, is the freshest face on the Australian tennis scene, flying the flag for her new country and adding even more firepower to the nation’s proud tennis arsenal.

The aggressive right hander with a double-handed backhand and flexible court coverage has a game that resembles a certain Kim Clijsters. Quite apt, considering Kim Clijsters was an idol of Gavrilova’s growing up.

Her résumé is impressive; 2010 U.S. Open junior champion, singles gold at the 2010 Youth Olympics and a former world No.1 junior.

The enthusiastic 20-year-old is coached by Nicole Pratt and competed recently at the U.S. Open for the first time as an Australian. Having started the game aged six, she divulges the differences between the junior and professional game. “In juniors it was more up and down. Now they cherish every point,” she says.

More notable of late has been her rise in the seniors, winning an ITF in Bangkok as a qualifier and making the round of 16 at the WTA event in Tokyo, again as a qualifier.

Gavrilova, who is competing this week at the Bendigo Tennis International, is a player worth keeping an eye on. Originally from Moscow, with her formative years spent at the famous Spartak Tennis Club, she acknowledges how tennis was just part of life. “We would play all the time. Start at 10 in the morning and leave at 8 at night. We just played tennis all day.”

The new Aussie with laser-sharp groundstrokes now calls Melbourne home, and appreciates the structure in place here, both on and off the court. On court she is all business. Off the court she is a consummate athlete. Her determination is obvious; her only vice is perhaps a weakness for chips.

“If you put chocolate or chips in front of me I will always choose the chips,” she says.

This being said, the healthy options do far outweigh the wicked desires: “I made Russian golubtsy. It’s like a cabbage roll with meat and rice. You can check out at my instagram @eatlikeanathlete,” she laughs. “It took me three and a half hours to make.”

The player nicknamed “Dasha” has settled well in to the daily Melbourne life. She is a coffee aficionado, café enthusiast and Carlton football club devotee. Tennis has taken Daria around the globe but she concedes that Melbourne is her favourite city and home to the Grand Slam she would most like to one day conquer.

The choice of Australian Rules football team can be linked to Daria’s long-time boyfriend. “I support Carlton, because of Luke,” she discloses, speaking of Luke Saville, a two-time junior Grand Slam champion himself and another young Aussie making serious strides on the professional circuit.

The two are a long-standing couple having met in Mexico at the 2009 Junior Davis and Fed Cup. Apart from their unique professions the couple have a very normal relationship. She subjects him to rom-coms while he tries to maintain control of the TV remote. “And we hit together, sometimes, when I’m desperate,” she laughingly admits. There’s no word – yet – on whether they will be a mixed doubles pairing at Australian Open 2015.

There have been plenty of famous tennis couples; currently the most notable is Maria Sharapova and Grigor Dimtrov. Presumably if Gavrilova and Saville keep rising up the ranks they could well be the next. Daria and Luke, Savilova, or even Gav and Sav? Naming options are endless, but the sky is the limit.

Follow Gavrilova’s progress at the Bendigo Tennis International, where she plays quarterfinal Friday.