All systems go in Bendigo

As the first of two Bendigo Tennis International Pro Tour events gets underway this week, James A. Crabtree gets the inside scoop from tournament director Andrew Reynolds. 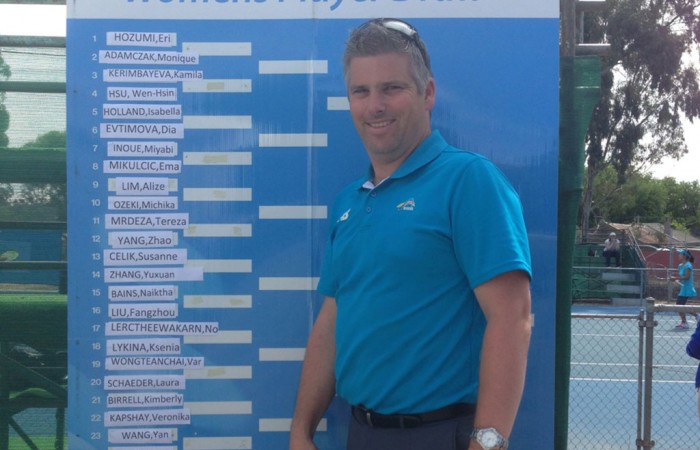 When thinking of a tournament the primary focus is always on the players. Only when we hear the acceptance speech of the eventual champion do we hear a quick thank you and praise lauded to those who actually make the event happen.

One such person who is integral to any tournament is the tournament director; in this case, Andrew Reynolds at the Bendigo Tennis International.

“I am probably the most popular guy at the tournament,” Reynolds confesses, laughing. “Because I’m the person responsible for handing out the cheques.”

Still, Reynold’s obligations go far beyond handing out winnings. He has to liaise with players, sort out accommodation issues, communicate with media, organise stringers, officials, and physiotherapists, and advise parents and coaches whilst keeping a watchful eye over the code of conduct of all.

Reynolds has been overseeing ranking tournaments as tournaments manager for over two years, in a position he relishes. In many instances he gets to see the future stars making their first imprints on the tour such as Thanasi Kokkinakis and Nick Kyrgios. Conversely he has witnessed wily veterans reinvigorate their careers, such as Casey Dellacqua, who won both 2013 Bendigo events before rising more than one hundred spots in the rankings over the 2014 season.

The two weeks in Bendigo do wonders as an advertisement for tennis. Reynolds beams: “a number of junior and open age events run at the same time. We had thirty courts in action. Younger players getting a chance to see a professional up close, playing on the same courts, it’s exciting and inspiring and only adds to a great atmosphere.”

One of the major attractions of the Bendigo International, apart from being in a beautiful regional city, is the fact there are two tournaments held back to back at the same venue. Reynolds points out that it gives players the time to take a mini break from the usual nomad lifestyle and a chance to ground themselves and really enjoy the city.

“Most players do travel as a tight unit with a just a parent and coach. Last year Zuzana Zlochova from Slovakia spent four months travelling the tour in a campervan. Some do however travel in teams as a country squad and often rent a house together, which is a good way to keep the expenses down,” he says.

It should be remembered that player’s prize money has to go a long way to deal with life essentials like food and accommodation. And let’s not forget tennis necessities like a fresh restring.

Form, winning and habit link closely with each other and very little surprises Reynolds. “Some players requests are linked very closely with superstition. Many players may stay well away from a particular practice court. Others may like to be second or third on a court. Many of the Europeans prefer their water to be at room temperature, not chilled. One player was determined to go grape grazing during the Mildura event. The requests are varied,” he reveals.

Despite the uniqueness of player demands, the biggest problem for Reynolds is always the ones he cannot control. The age-old battle tennis has with the weather is the major problem that lands on his desk.

“Rain will mess with the scheduling horribly and push everything back. Often the biggest problem is with wind rather than rain. In Traralgon recently we had 70km winds that were knocking over everything, eski’s, chairs. Not to mention what it was doing to the ball on court,” he says.

The two Bendigo International events run consecutively over the first two weeks of November. Impressively, 22 nations are represented from Kazakhstan to Taipei, Thailand to Germany, including players that are on the brink of becoming world beaters.

The success of the Bendigo tournament has been noticed, as it has been shortlisted for an Australian Tennis Award in the Most Outstanding Tournament category, along with the Mildura event, which also boasts Reynolds at the helm.