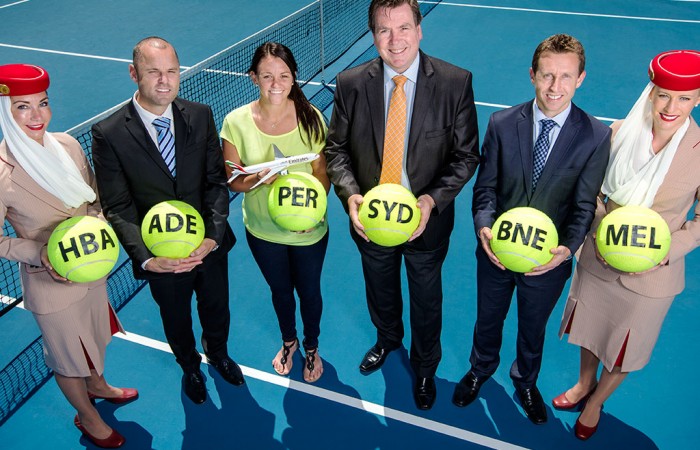 The announcement comes a day after Emirates was named official airline partner of the Australian Open.

Tom Larner, Tennis Australia’s Director, Events and Facilities, said the deal was a coup for the elite series, which serves as the official lead-in to the first Grand Slam of the year.

“Our new partnership with Emirates reflects the prestige reputation of this series, which draws the world’s top players to our shores each summer. This season alone we’ll see Roger Federer and Maria Sharapova compete in Brisbane, Andy Murray, Serena Williams and Perth’s own Casey Dellacqua at Hopman Cup, Nick Kyrgios will play in Perth as well as joining Samantha Stosur in Sydney. While at the WTC in Adelaide Marin Cilic and John McEnroe are just two of the big names competing.

“It’s an exciting step forward for the Australian Open Series, and we can’t wait for Emirates to join us in delivering these events this summer.”

Sir Tim Clark, President of Emirates Airline, said the new deal reflected the airline’s commitment to tennis and its strategic ambition to promote Australia as a travel destination.

“The Australian Open is a first class sporting event drawing a truly global audience to Melbourne Park each summer, while millions more watch the action on screen,” Sir Tim said.

“Our commitment to the Australian Open and the Emirates Australian Open Series is a natural extension of our existing tennis sponsorship portfolio around the globe, which now includes three of the four Grand Slams.

“Partnering with the Australian Open and the Emirates AO Series demonstrates our ongoing commitment to Australians. Sharing and supporting our customers’ passions is key to our sponsorship activity, and we plan to utilise this partnership to enhance the fan experience and create an even stronger connection with our customers in Australia.”

Emirates operates 84 flights a week from Australia to Dubai, including four flights per day onboard the flagship A380 aircraft from Sydney, Melbourne and Brisbane. The expansive global route network offers Australians connections to more than 140 destinations in more than 80 countries worldwide.