Enjoying playing in front of her family in her home state at the Perth Tennis International, Maddison Inglis has begun her campaign at the Pro Tour event in style. 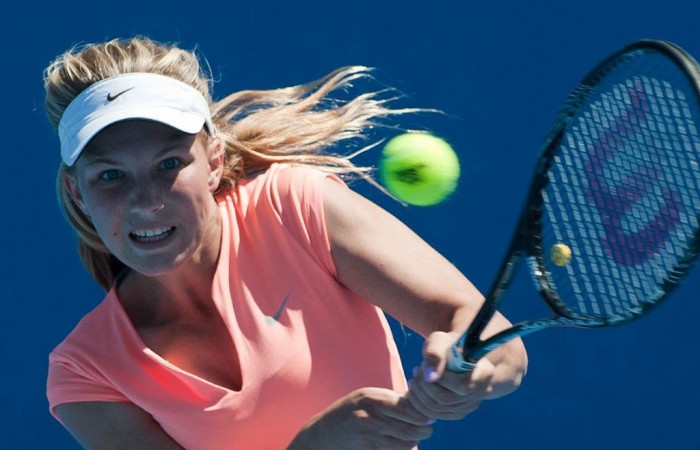 Local teenager Maddison Inglis cruised to a 6-0 6-1 victory over Hungarian qualifier Naomi Totka in her first round match at the 2014 Perth Tennis International on Wednesday.

It was a convincing win for the 16-year-old wildcard, who took advantage of the testing wind which prevailed throughout the day.

“I’m so used to the conditions here,” Inglis said. “And it helped today because I don’t think my opponent was able to handle the wind very well.”

Inglis is a young star on the rise. After winning the 18-and-under Australian Championships in 2013, she went on to represent Australia in the Junior Fed Cup this year, along with reaching finals at both the Victorian Junior Claycourt International and the New Zealand ITF Summer Championships.

With her family watching on, the homegrown talent is thoroughly enjoying playing in Perth.

“It’s nice to be able to stay at home as well,” she said.

She won’t be home for long though; Inglis intends to play some ITF Junior events in Korea during November before returning to Australia for the Bendigo Tennis International and the December Showdown.

“A big goal of mine is to try and get my ITF Junior ranking down low enough to play junior Grand Slams in 2015,” Inglis said.

Here in Perth, she now faces a tough second round against the Japanese sixth-seed, Rika Fujiwara.

Earlier in the day, a couple of experienced Aussie campaigners continued their resurgence.

Jessica Moore followed on from the good form that took her to the final in Toowoomba last week in defeating third-seeded Frenchwoman, Alize Lim, while Monique Adamczak reached the second round after dispatching Ukrainian Veronika Capshay in straight sets.

“It’s been a long road back, but I’m probably in the best shape I’ve ever been in,” Adamczak said after the match.

“I’m really excited about the future.”

Adamczak now faces Croatian eighth seed, Tereza Mrdeza, while Moore finds herself in a rematch of the Toowomba final where she gets an opportunity to turn the tables on Swede Ellen Allgurin.