Nick Kyrgios and Thanasi Kokkinakis have made a special visit to Hartwell Primary School in Melbourne's east on Wednesday to take part in ANZ Tennis Hot Shots. 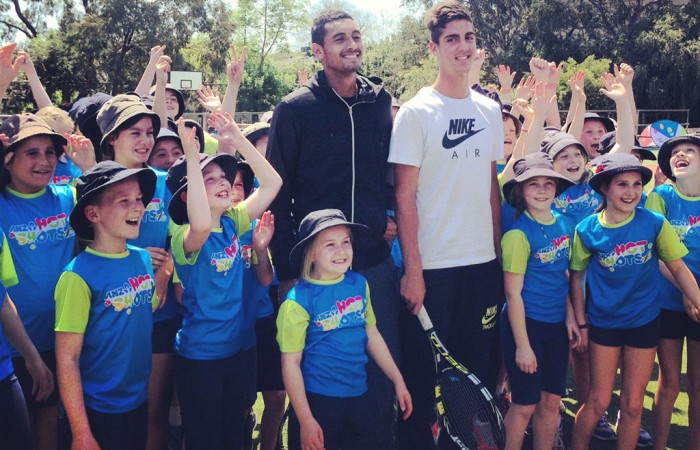 Nick Kyrgios and Thanasi Kokkinakis have made a special visit to Hartwell Primary School in Melbourne’s east on Wednesday to take part in ANZ Tennis Hot Shots.

The young Aussie duo’s careers have surged of late; Kyrgios reached this year’s Wimbledon quarterfinals and is verging on the world’s top 50, while Kokkinakis has risen to a career-high ranking of 158th.

Their success on the world stage has coincided with a surge in ANZ Tennis Hot Shots participation; since 2010 registrations have increased by more than 300 per cent to 139,584 in 2013/2014, putting it among Australia’s most popular and fastest growing participation programs.

“It’s always special to come out and inspire people to play,” Kyrgios said.

“That’s why I play the game – at the end of the day I want to get people playing the game because they love it. I don’t do this (primary school visits) often so when I come out with Thanasi I know it’s a pretty important thing to do.”

Hartwell Primary School is one of 848 schools across Australia to have signed up to the ANZ Tennis Hot Shots National School Partnership Program, which supports schools who incorporate tennis into their health and physical education curriculum.

Speaking to the students in a Q&A session hosted by Todd Woodbridge, Kyrgios told them that they were fortunate to have access to ANZ Tennis Hot Shots, which did not exist when he took his first steps in the game at age seven.

“You’ve got to use that (opportunity) when you can. I wish I had had such a good sort of organisation to get started in tennis and really enjoy it,” he said.

Students were thrilled to hear stories about the pair’s careers, including Kyrgios’ defeat of Rafael Nadal at Wimbledon, their practice sessions with stars of the game including Roger Federer, and their fastest serves ever recorded.

In 2014 and 2015 ANZ will provide ANZ Tennis Hot Shots racquets to first year primary school children taking part in the NSPP program and will help fund 50 new schools to sign up to the initiative.