Australian Anastasia Rodionova and Russian partner Alla Kudryavtseva have snared the eighth and final doubles place at the season-ending WTA Finals in Singapore. 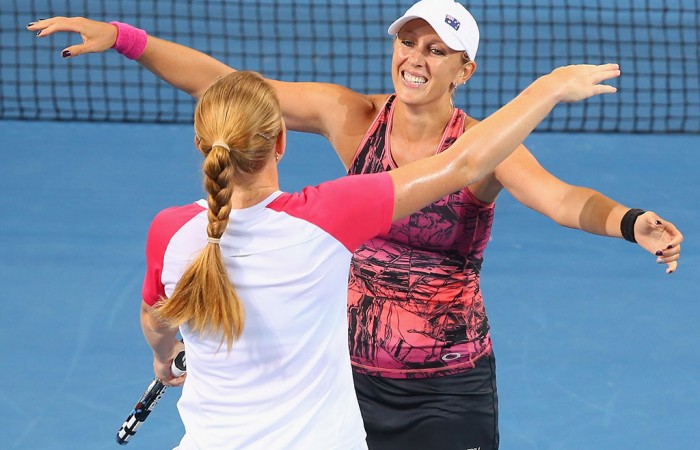 Australian Anastasia Rodionova and Russian partner Alla Kudryavtseva have snared the eighth and final doubles place at the season-ending WTA Finals in Singapore.

The duo clinched their berth after winning the doubles title at the WTA Tianjin Open in China, holding off the Romanian-Slovenian duo of Sorana Cirstea and Andreja Klepac 6-7(6) 6-2 [10-8].

Rodionova and Kudryavtseva found themselves locked in a race for the eighth spot in Singapore against Martina Hingis and Flavia Pennetta, the veteran doubles duo who recently reached the US Open final and who were charging up the leaderboard.

But when the top-seeded Swiss-Italian duo slipped up in the Tianjin quarters, it cleared the way for Rodionova and Kudryavtseva, who won four matches to storm to their third title of 2014.

Earlier in the season they hoisted the silverware at the Brisbane International and in Dubai, both WTA Premier-level events.

“But getting into Singapore is great. It wasn’t our last chance – we had another chance next week – but to do it here is definitely the cherry on top of the cake. We’re really looking forward to it.”

Meanwhile, Sam Stosur’s victory at the Japan Women’s Open in Osaka has vaulted her into sixth spot in the race to the WTA Tournament of Champions in Sofia, Bulgaria.

Stosur reached the final of last year’s event, which is open to the six highest-ranked players who have won an Interational-level title during the season – and who are not participating in the WTA Finals – plus two wildcards.

Already confirmed in the field are Ekaterina Makarova, Dominika Cibulkova and Andrea Petkovic, and wildcards Flavia Pennetta and Tsvetana Pironkova.

Stosur is not playing this week but instead will be keenly monitoring the progress of Svetlana Kuznetsova and Karolina Pliskova, players sitting just behind her in the Race to Sofia and who could leap-frog her with a deep run at the Kremlin Cup.