John Newcombe has been named a Legend of Australian Sport at a gala celebration marking the 30th anniversary of the Sport Australia Hall of Fame. 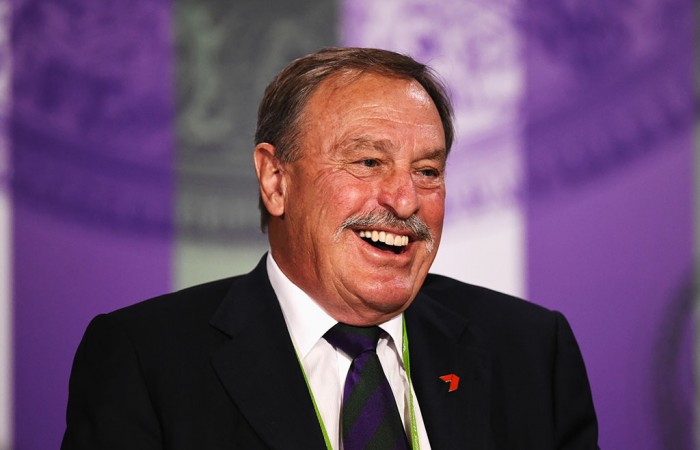 It’s one of the most famous sayings in Australian sport, and on Thursday night the who’s who of Australian sport said “Bewdy Newk” in unison as tennis great John Newcombe AO OBE was elevated to Legend status by the Sport Australia Hall of Fame at its 30th anniversary gala dinner.

In other awards, presented to a sell-out crowd, dual Commonwealth and reigning Olympic 100 metres hurdles champion Sally Pearson OAM received ‘The Don’ award as the Australian athlete who most inspired the nation through her achievements in the past twelve months.

Young tennis star Nick Kyrgios was among the nominees for the award.

One of the nation’s most loved sporting stars, Newcombe became the 36th Legend of Australian Sport.

A former world No.1, he won seven Grand Slam singles titles, as one of the last of the Australians to dominate international tennis in the late 1960s and 1970s.

Newcombe’s serve, forehand and volley were the backbone of his attacking game, which was at its best on grass. His heavy serve was possibly the best of his era. To the delight of fans, and the surprise of his opponents, he frequently came up with a second-serve ace.

Newcombe also amassed an all-time record 17 Grand Slam doubles titles, and is one of the few men to have been ranked world No.1 in both singles and doubles.

Newcombe was inducted into the Sport Australia Hall of Fame as an inaugural Athlete Member in 1985, and in 1986, his achievements were recognised with his induction into the International Tennis Hall of Fame at Newport, Rhode Island, USA.

But for all his greatness on the tennis court, Newcombe is celebrated equally as the quintessential Aussie bloke with his trademark moustache (at one stage rumoured to be insured in the millions), and known simply as “Newk”.

Newcombe was gracious in accepting the honour of being elevated to Legend of Australian Sport status, saying: “You look around at all the legends here and they are the ones who I grew up idolising and I find myself sitting up here on stage, it’s pretty humbling.”

When asked about where the well known fire that he displayed on the court came from, Newcombe pointed to his mother as his major influence.

“My mum was the one who really encouraged me to use that fire in a positive way and I listened to that advice and it’s the best advice I can give to young kids today,” Newcombe said.

“If you do have that fire in your belly it can go one of two ways. If it goes in a negative way, you’re never going to make it. If you use that fire in a positive way it can be a tremendous support for you.”

Newcombe nominated John McEnroe as the one player that he would have loved to play against if he had the opportunity: “I would have had some fun with him,” he said.

Robert de Castella AO MBE, chair of the Sport Australia Hall of Fame selection committee, observed that Australia has a rich and proud tradition in tennis.

“Newk continued that tradition through the 1960s and 70s with an incredible seven Grand Slam victories and astonishing 17 Double titles,” de Castella said.