Kokkinakis pushes Lopez to the brink

Australians Thanasi Kokkinakis and Sam Groth have both suffered first-round losses at the Shanghai Masters, but not before putting up stern fights at the prestigious ATP event. 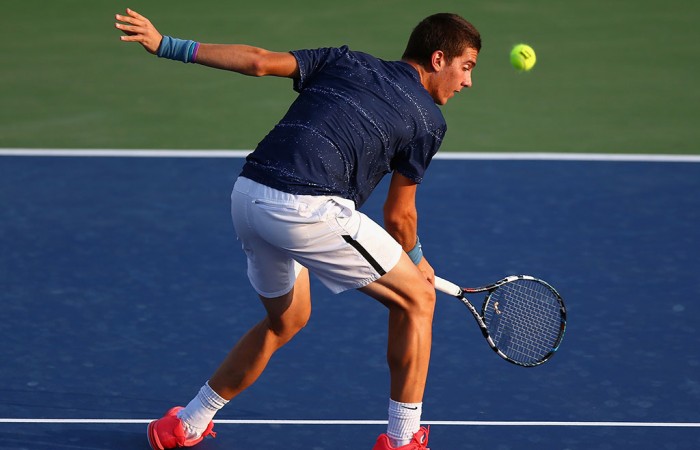 Australians Thanasi Kokkinakis and Sam Groth have both suffered first-round losses at the Shanghai Masters, but not before putting up stern fights at the prestigious ATP event.

The Australian teen, himself a qualifier ranked 173rd, fought for more than two hours and produced 16 aces before eventually going down.

Later on Tuesday in Shanghai, Groth went down 7-6(1) 6-3 to Slovakia’s Martin Klizan, who last week beat Nadal at the China Open in Beijing.

Meanwhile, Andy Murray’s bid to make the end of season ATP World Tour Finals remains on course as he powered through his opening match on Tuesday, defeating Russia’s Teymuraz Gabashvili 6-1 7-5.

The 27-year-old Scot is desperate to book his place in next month’s tournament, which features the world’s top eight players, and would need a deep run in Shanghai to help his cause.

The 11th seed in Shanghai, who is currently ninth in the Race for London, took one hour and 25 minutes to overcome the 29-year-old qualifier.

Meanwhile, Fabio Fognini, the 17th ranked player in the world, suffered defeat at the hands of 553-ranked Wang Chuhan of China, who showed great composure under pressure to seal a 7-6(5) 6-4 victory.

The 22-year-old wildcard saved four of the five break points he faced against the Italian 15th seed.

“I wanted to win this match, but I never actually thought I could do it,” Wang said.

“I practised with him in Beijing, so I knew a bit about him.”

Elsewhere, 12th seed Ernests Gulbis came up against a serving masterclass from his opponent Mikhail Youzhny, who dropped just 10 points on serve to beat the Latvian in two sets.

The Russian world number 35 – who had not won a match on the ATP Tour in his last three attempts – converted three of his four break points to win 6-4 6-1.

Canada’s Vasek Pospisil squandered a 5-2 lead in a second set tie-break as his opponent Santiago Giraldo forced a decider in their match.