Nick Kyrgios is getting bigger. 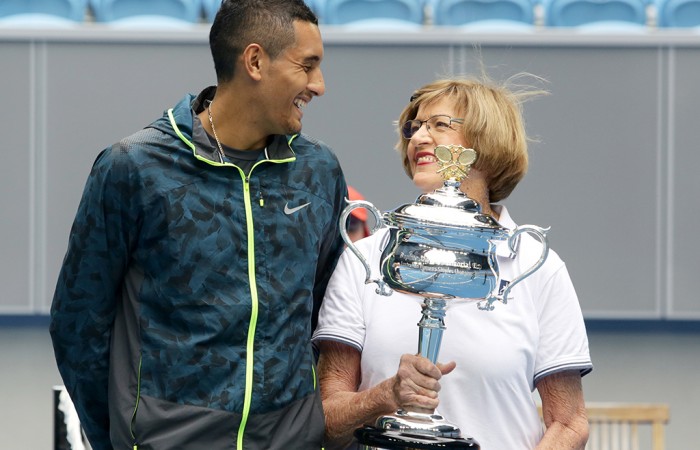 Nick Kyrgios is getting bigger.

That’s in the literal sense of the word, given the 19-year-old is spending plenty of time in the gym during his break from the international tennis circuit.

It’s in terms of the burgeoning profile that comes with being Australia’s likely top-ranked men’s hope when the home grand slam starts on January 19.

It’s also a fitting descriptor of Kyrgios’ aspirations at the Australian Open, an event which kickstarted the teenager’s breakout 2014 when he progressed to the second round.

“You’ve got to definitely believe you can win the tournament,” Kyrgios said.

“It’s important to go out there and believe you can win the tournament.

“If you visualise it … it’s supposed to help.”

It’s a school of thought that Margaret Court imparted on Kyrgios during Tuesday’s Australian Open launch.

Kyrgios had a hit with fellow up-and-comer Storm Sanders, Court and Victorian minister for sport and recreation Damian Drum at the revamped Margaret Court Arena.

“She’s still got it,” Kyrgios said of Court, an 11-time winner of her national title.

Court’s advice to Kyrgios was simple: visualise it.

“You better see yourself winning one of these majors,” she said.

Kyrgios is currently in Australia nursing a niggling arm issue.

“I’m getting healthy again … I’ve been in the gym and obviously monitoring my hitting,” he said.

“I’ve just got to get fitter and stronger.

“I’m playing at a higher level now, with fully-grown men.”

Kyrgios will next be in action at the International Premier Tennis League, linking up with the likes of Serena Williams and Andre Agassi in Singapore.

“I’m going to be picking all their brains,” he said.

Kyrgios vowed to “entertain as much” as he can at the Australian Open.

“And obviously get some results as well,” he quickly added, when asked about the expectation awaiting in January.

“I’m playing some really good tennis, hopefully I can carry it through.”

The installation of a retractable roof at Margaret Court Arena will be one of the major changes at next year’s tournament.

“It’s going to be insane. Probably a bit Davis Cup like,” Kyrgios said of the venue, which now boasts a capacity of 7500.

Prize money is up to $3 million for the men’s and women’s champions, with the total purse on offer being $36.3m.

Following the success of Roger Federer’s charity gala at Melbourne Park this year, Rafael Nadal will host a similar event in 2015.