Britain's Brydan Klein is the 2014 Alice Springs Tennis International champion after taking out the men's singles title in central Australia at the weekend. 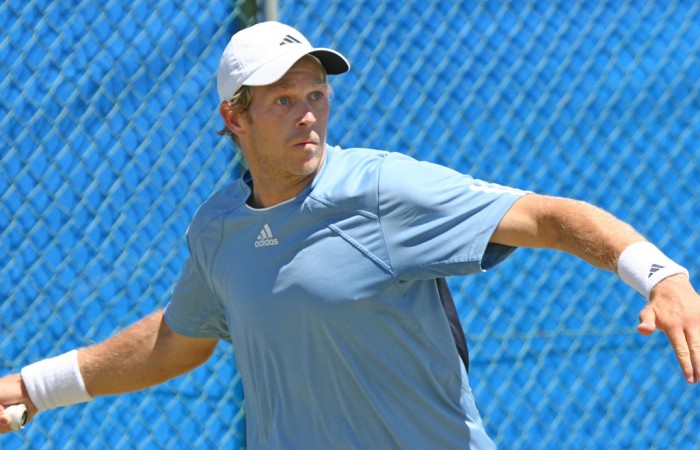 Britain’s Brydan Klein is the 2014 Alice Springs Tennis International champion after taking out the men’s singles title in central Australia at the weekend.

Klein was in a rush in the first set, jumping to a 4-0 lead before opponent Dayne Kelly recorded a score on the board. Klein finished the set off with an ace to take it 6-1.

The second set was a lot more competitive, with players holding serve convincingly up until 4-4, when Klein broke Kelly’s serve for a 5-4 lead.

Klein, seeded second for the tournament, progressed relatively comfortably through the draw, taking out sixth seeded American Mitchell Kruger in the quarterfinals and overcoming third seed and doubles partner Dane Propoggia in the semis.

Kelly also enjoyed a great week in Alice Springs, saving three match points in his quarterfinal against top seeded American Jarmere Jenkins; he then needed just over an hour to defeat Steven DeWaard in the semifinals.

The Alice Springs Tennis International is the second title for Klein in 2014, after he took out the Futures title in Bejar, Spain in August; he owns 15 career ITF Futures titles.

The Australian Pro Tour moves to Queensland for the Cairns Tennis International on 4-11 October.

The Cairns Tennis International is the second leg of the Northern Circuit, which finishes in Toowoomba with the Hutchinson Builders Toowoomba International on 11-18 October 2014.