Sam Stosur has put up a tremendous fight before going down to Petra Kvitova in the semifinals of the China Open on Saturday. 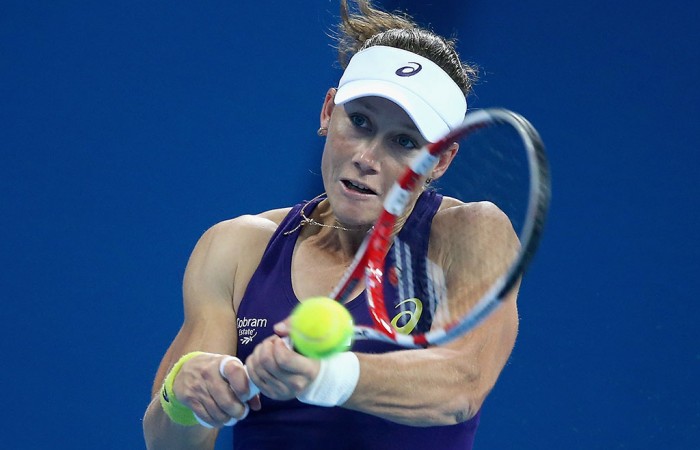 Sam Stosur has put up a tremendous fight before going down to Petra Kvitova in the semifinals of the China Open on Saturday.

Stosur battled the third seed for nearly two-and-a-half hours before succumbing 6-3 5-7 6-2, sending Kvitova through to her third final in her past four tournaments.

The Czech has now won 14 of her past 15 matches, and extends her head-to-head record against Stosur to 7-1.

Yet Stosur has also displayed some stellar form this week in Beijing and continued it against the left-hander, serving strongly and hitting her backhand with especially impressive conviction.

She recovered from the loss of the first set and a rain delay to go toe-to-toe with Kvitova in the second set, a high-quality battle that had the crowd on Beijing’s Diamond Court enthralled.

As Kvitova ailed – she called for the trainer during the second set – Stosur flourished, returning consistently deep to put the Czech under pressure in her service games.

Eventually she cracked, and Stosur secured the valuable break in the 12th game to level the match at a set apiece.

Holding serve to love to start the third, Stosur looked set to run away with the match.

Yet Kvitova steadied while Stosur erred on some important points; despite having several break point chances the Aussie was unable to convert.

With renewed confidence, the reigning Wimbledon champion steamed to the finish line, wrapping up victory in two hours and 21 minutes.

She’ll next face the winner of the second semifinal between Maria Sharapova and Ana Ivanovic.