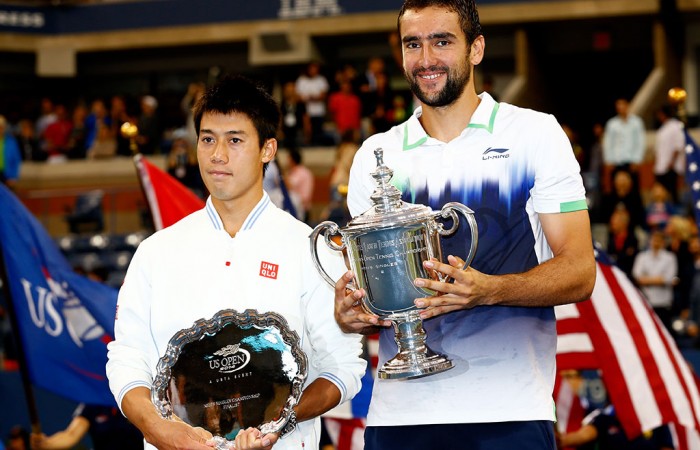 US Open champion Marin Cilic (CRO) and runner-up Kei Nishikori (JPN) will re-ignite their rivalry at this summer’s Brisbane International presented by Suncorp.

Cilic, 25, took out his first Grand Slam title at Flushing Meadows this month with a straight sets win over Nishikori, the first Asian man in history to reach a Grand Slam final. The world No.9 has rocketed up the rankings in recent months, climbing from No.37 in January to join the world’s top 10.

Cilic said he would arrive in Brisbane looking to kick-start another successful season.

“This year I played in Brisbane for the first time and I really loved the tournament. I think the attendance was the most positive [aspect] and made a very nice experience for me because it was really packed every day. I really like to play in Australia so it was one of the obvious choices to come back again next year,” he said.

The Grand Slam title-holder expects a strong field to descend on Queensland Tennis Centre this summer, but will take renewed confidence into the event.

“Also in 2014 it was a strong field in Brisbane and I feel everybody is pretty much motivated for the first couple of weeks of the year, they’re coming in fresh from the off-season and it’s definitely a very interesting part of the year to see how the players are going to do and what they have worked on, and it won’t be different in 2015.

“Knowing I have this Grand Slam in my closet, for sure it will bring me more freedom in my game. Mentally I know what I need to do to achieve this kind of accomplishment and especially for my training, [I know] I was really on the right track and my game is enough if I’m playing well to win a Grand Slam so that’s going to bring me a lot of help in my preparations and confidence.”

Twenty-four-year-old Nishikori will return to Brisbane for a fifth time, having competed at the event in 2009 and every year since 2012. In 2014 he ousted Cilic in the quarterfinals before falling to local favourite Lleyton Hewitt (SA) in the following round.

“I love coming to Brisbane and always enjoy playing in front of the big crowds,” Nishikori said.

“I’ve made the semifinals the past two years so will be looking forward to bettering that in January. The fields are always strong, but it works well for me to start my year in Brisbane and play the best players in the world in the first week.”

Brisbane International Tournament Director Cameron Pearson said the US Open finalists would add significant firepower to the men’s field, with three of the world’s top 10 players now signed to compete.

“Marin and Kei are two players at the top of their game and we’re excited to welcome them to Brisbane again this summer,” he said.

“The field is once again shaping up to be incredibly strong, and we hope to see a great crowd turn out in January to  see some of the best players in the world in action here in Brisbane.”

“Local and visiting tennis fans will be thrilled by the talent on offer at Brisbane International 2015,” Ms Stuckey said.

“The tournament will once again provide a boost to the state’s economy.

“The Queensland Government, through Tourism and Events Queensland, is proud to support this event as part of its goal to double annual overnight visitor expenditure. The government’s 20-year plan for tourism, Destination Success, recognises the importance of events in bringing visitors to our destinations.”

Cilic and Nishikori will join 17-time Grand Slam champion Roger Federer (SUI) and a host of the world’s top tennis players on court in Brisbane this summer. The event will be officially launched at Queen Street Mall, Brisbane next Wednesday 1 October.

Brisbane International 2015, presented by Suncorp and supported by Tourism and Events Queensland, will be held at Queensland Tennis Centre on 4-11 January 2015.

Premium tickets are now on sale at ticketek.com.au/brisbaneinternational.