UPDATE 2:45pm: Reigning Australian Open champion and world No.6 Li Na has announced her retirement from tennis due to a recurring knee injury. 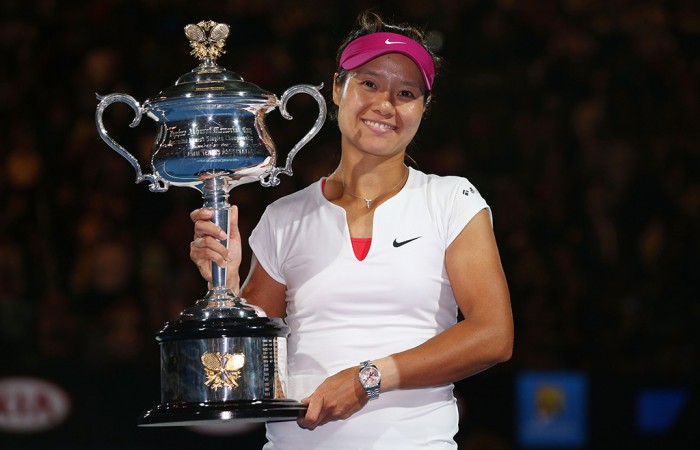 The 32-year-old, who just seven months ago won the Australian Open to rise to a career-high ranking of No.2, was Asia’s most successful player and a trailblazer for the sport.

She posted a statement on her Facebook page on Friday, ending a week of intensifying speculation that she would announce her retirement ahead of the new WTA event at Wuhan, her home town.

“I’ve succeeded on the global stage in a sport that a few years ago was in its infancy in China,” Li wrote.

Three years ago, Li became the first Asian national to win a grand slam tournament at the French Open, a result credited with igniting a tennis boom in Asia.

She went on to clinch the Australian Open title in January in her third trip to the final at Melbourne Park.

She hasn’t played since a third-round defeat at Wimbledon, withdrawing from the US Open citing a knee injury.

“Most people in the tennis world know that my career has been marked by my troubled right knee,” Li said in the open letter she posted online.

“After four knee surgeries and hundreds of shots injected into my knee weekly to alleviate swelling and pain, my body is begging me to stop the pounding.”

After three operations on her right knee, dating back to March 2008, Li said her most recent surgery in July was on her left knee.

“One of my goals was to recover as fast as I could in order to be ready for the first WTA tournament in my hometown. As hard as I tried to get back to being 100 per cent, my body kept telling me that, at 32, I will not be able to compete at the top level ever again,” she wrote.

“The sport is just too competitive, too good, to not be 100 per cent.”

Li rose to No.2 in the rankings after her win in Australia in January, but dropped to No.6 this month due to her injury-enforced inactivity.

She said she was “personally looking forward to opening a new chapter of my life”, including launching her own tennis academy.

The Women’s Tennis Association (WTA) described Li as a Chinese tennis trailblazer in a statement celebrating her 15-year professional career.

“Li Na has been a fun, powerful, and wonderful player on the WTA tour and, along with her fans, I am sad to hear that she has retired,” WTA chief executive Stacey Allaster said.

“In addition to her amazing tennis abilities and her warm and humorous personality, she is a pioneer who opened doors to tennis for hundreds of millions of people throughout China and Asia.

“It’s hard to be a household name in a nation with 1.4 billion people, but that’s what Li Na is.”