Australian Jarmila Gajdosova has won two matches in a row on the WTA circuit for the first time this year after a battling three-set victory at the Hong Kong Open. 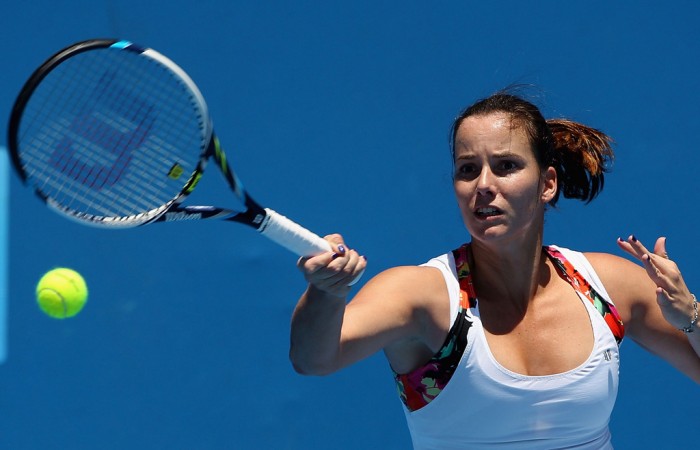 Australian Jarmila Gajdosova has won two matches in a row on the WTA circuit for the first time this year after a battling three-set victory at the Hong Kong Open.

Gajdosova defeated Kiki Bertens of the Netherlands 4-6 6-1 6-4 as she continues to rebuild her ranking after a long battle with illness.

Finishing last year ranked at 232 in the world, the former No.25 has largely played lower level events in 2014 to improve her ranking.

Now at No.99, Gajdosova will be looking for a further boost before the year is out but may next face second seed Daniela Hantuchova for a place in the semifinals.

Hantuchova completed the first-round action by brushing aside local wildcard Zhang Ling 6-1 6-4 and will next play Alison van Uytvanck.

Meanwhile top seed SabineLisicki kept her cool on a searing Wednesday night to power past Grace Min 6-1 6-1 and into the quarterfinals.

Lisicki had spent almost two-and-a-half sapping hours on court the previous night in getting past Romania’s Monica Niculescu in three sets, but was in a big hurry 24 hours later.

The German sealed the second-round victory over her American opponent in just 40 minutes as the mercury nudged 33 degrees celsius under the Victoria Park floodlights.

“Last night was a tough match,” said Lisicki. “I eventually found my rhythm and I was able to take that into today.”

The world No.31 will now have a day off before playing China’s Zheng Saisai on Friday for a place in the last four after Zheng ousted the No.6 seed Yanina Wickmayer of Belgium in the biggest upset of the day.

Former French Open champion Italy’s Francesca Schiavone reached the quarterfinals when her veteran opponent, 44-year-old Kimiko Date-Krumm of Japan, was forced to retire at 4-0 down in the second set with a shoulder injury. Schiavone had taken the first 6-3.