Australia's new-found domination of tennis junior Grand Slams is reward for a decade of planning and old-fashioned tough love. 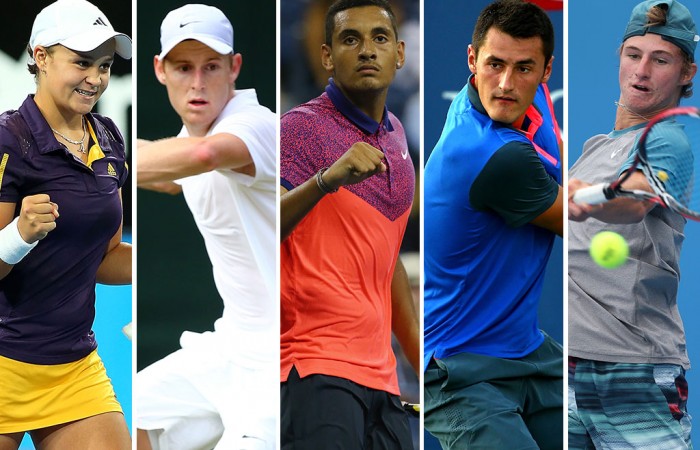 Australia’s new-found domination of tennis junior Grand Slams is reward for a decade of planning and old-fashioned tough love.

In the past 10 years, Australia’s young aces have won eight major singles titles, including two each for Bernard Tomic and Luke Saville, and also recorded six runner-up finishes.

Seven of those triumphs – plus five of the losing finalists – have been in the junior boys’ singles.

When it comes to producing junior boys champions, statistics uncovered by AAP reveal Australia to be the world leader.

The turnaround in fortunes has coincided with the arrival at Tennis Australia (TA) of former junior development chief and now TA boss Craig Tiley in 2005.

“Just in the way that we’re coaching and training the players and trying to hold them accountable to higher standards of work ethic, respect and I think also team work,” Smith said.

“Over the last maybe three or four years with Craig Tiley, and obviously Todd Woodbridge and Scott Draper in leadership roles, they’ve built a really incredible team of coaches and physical trainers, physiotherapists, sports psychologists, just a massive team of people that have a lot of experience.

“That’s made a difference.”

“He’s definitely made a push for us to be a little bit tougher on some of these young players coming up and to again push them to higher standards,” he said.

“In Australia, we sometimes get criticism when we’re tough on players and in the past maybe we’ve been soft on some players.

“But I think we’re starting to get the balance right in terms of being tough when we need to be and also being understanding and helping the kids along their journey – because it is a journey.

“It’s a process and for sure with Omar we’ve had a lot of ups and downs and it’s been a rocky road at times.

“But he’s a great kid and he’s starting to turn the corner and make steps in the right direction and this is a big step for him, a big confidence boost.”

Tellingly, in the decade between 1995 and 2004, when TA’s previous administration has roundly been criticised for “taking their eye off the ball” while focusing on building the Australian Open brand in favour of developing young talent, Australia only produced two Grand Slam junior champions – Jelena Dokic (1998 US Open) and Todd Reid (2002 Wimbledon).

So while Australia’s output of junior Grand Slam champions has quadrupled in the past 10 years, the big challenge for the likes of Jasika, Nick Kyrgios and Tomic continues to be making the ultimate transition to the senior ranks.

Pat Cash, who won two junior Slam titles before beating Ivan Lendl in the 1987 Wimbledon final, remains the only Australian player in the modern era to have done so.

Jasika’s coach says Australia’s rich tennis history has also made it tougher on the modern-day generations.

“Australia has an amazing heritage of professional tennis and of Davis Cup victories and so many former great players to sort of lead the way, but that also does bring pressure to the young kids and they feel that,” Smith said.

“It’s a fairly small country and tennis is a pretty big sport in comparison to the United States and some of the other countries that are competing – and sometimes they feel pressure.

“They’re only young kids and they need time to mature. We need to help them and it’s just finding the way to ride the waves because there’s always going to be waves. Nothing is ever easy and it’s never simple.”

“We always recognise we still have a long way to go,” Tiley said.

“We are certainly seeing the programs put in place from 2005/2006 starting to bear fruit and it’s a great platform to build on.

“None of us are kidding ourselves that the job is done.”