UPDATE: Omar Jasika and Japanese partner Naoki Nakagawa have won the boys' doubles title at the US Open on Saturday, after Jasika earlier advanced to the boys' singles final in New York. 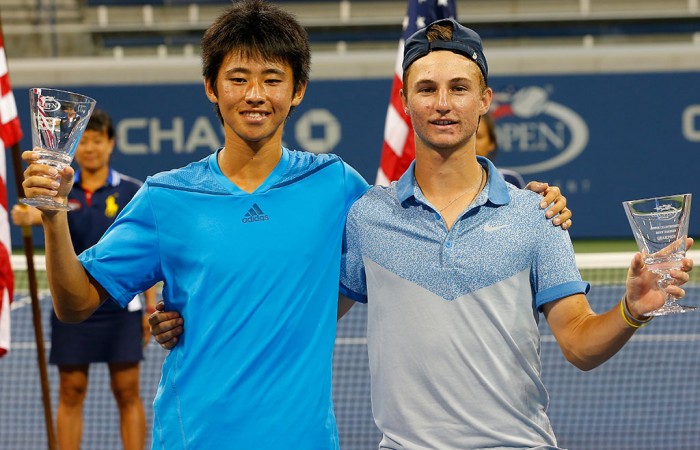 But not even Cash, Tomic or other celebrated names on the boys’ singles honour roll including Stefan Edberg, Andy Roddick and Andy Murray could manage a feat that Jasika has the chance to pull off on Sunday (4am Monday AEST) in New York.

Jasika warmed up for his singles final against French fifth seed Quentin Hayls with with victory in the junior doubles decider on Saturday.

The 17-year-old from Melbourne teamed up with Japanese partner Naoki Nakagawa to beat Brazilians Joao Menezes and Rafael Matos 6-3 7-6(6), saving three set points in the tiebreaker before clinching the title.

Spaniard Javier Sanchez in 1984 is the only player to have ever completed the US Open singles and doubles double in the boys’ events and Jasika admits he can’t quite believe he now has a shot at it.

“It is just mind blowing,” he said.

Making his run even more remarkable is the fact the Victorian has had to double up and play two matches for the past four days in a row.

Unseeded in the singles, Jasika has cut a swathe through the draw.

He has won five straight matches and upended American third seed Jared Donaldson – the highly-rated world No.303 who was awarded a wildcard into the men’s main draw – in round three.

The youngster advanced to the championship match when German Jan Choinski retired from their semifinal suffering in Flushing Meadows’ brutal heat while trailing 6-3 4-1 on Saturday.

“When I won the first set, he was starting to slow down a little bit and I started to figure out he was struggling in the heat,” Jasika said.

“I just tried to make as many balls as I could to wear him out. I got the early break in the second and that is when he finished the match.”

If he wins the final, Jasika will be Australia’s sixth junior Grand Slam champion in the past seven years, joining not only Tomic, but players such as man of the moment Nick Kyrgios, and Luke Saville and Ash Barty.