Crafty Spaniard Tommy Robredo has brought Nick Kyrgios crashing back to earth with a third-round elimination of the teenage ace at the US Open in New York. Robredo overcame a blistering opening from Kyrgios to grind out out a 3-6 6-3 7-6(4) 6-3 victory that leaves Casey Dellacqua as Australia's lone singles survivor at the final Grand Slam of the… 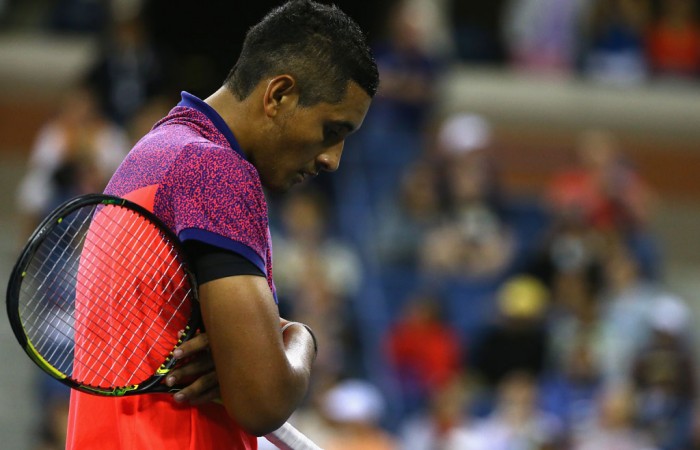 Crafty Spaniard Tommy Robredo has brought Nick Kyrgios crashing back to earth with a third-round elimination of the teenage ace at the US Open in New York.

Robredo overcame a blistering opening from Kyrgios to grind out out a 3-6 6-3 7-6(4) 6-3 victory that leaves Casey Dellacqua as Australia’s lone singles survivor at the final Grand Slam of the year.

Kyrgios lit up Arthur Ashe Stadium and had former world No.1 Jim Courier gushing in the commentary box with a dazzling first-set blitz, but paid the ultimate price for underestimating Robredo’s class and guile.

The 32-year-old last year ousted five-times champion Roger Federer and two days ago rallied from two sets down to defeat Simone Bolleli in the previous round.

Not taking the court for their prime-time match-up until after 10 o’clock, Kyrgios started like a man trying to make a midnight flick.

He led 5-0 after barely 15 minutes and secured the first set before many spectators had even found their seats.

“Oh my, it’s showtime already,” Courier said after Kyrgios broke Robredo early in the second set and then held with a spectacular 45-second service game.

“This is really impressive stuff. This kid is having his way with last year’s quarterfinalist.

“Someone better go out there and ask him if he’s even awake. This is what we call a dream-like state. This is the zone right now.

“This is a tremendous athlete playing tennis and you’re seeing the full arsenal.”

But from 2-0 and three more break-point chances up in the second set, Kyrgios lost his way, dropping his monster serve twice to allow the 16th seed back on level terms.

The third set went on serve all the way until a pivotal tiebreaker.

After trailing 3-0, Kyrgios recovered to lead 4-3 before smashing his racquet in fury after dropping both his next two points on serve as Robredo snatched the breaker and the set.

Bidding to become the first teenager in six years to make the men’s last 16 at Flushing Meadows – and to also overtake Lleyton Hewitt as Australia’s new No.1 – Kyrgios was unable to muster any fourth-set fightback.

The Wimbledon quarterfinalist was broken to love on his first service game as Robredo charged to a 3-0 lead.

There were no more breaks back as Robredo served out the contest to love after two hours and 28 minutes.

The 32-year-old’s prize for a quintessential win for experience over youth is a last-16 clash on Monday with Australian Open champion Stanislas Wawrinka.

Dellacqua earlier on Saturday scored a hard-earned 6-3 3-6 6-4 third-round win over talented Czech Karolina Pliskova to match her run to the fourth round of this year’s Australian Open at Melbourne Park.

The 29th seed plays Italy’s world No.12 Flavia Pennetta on Monday for a coveted place in a grand slam quarter-final for the first time.