Kyrgios rues the one that got away

Nick Kyrgios rued letting slip a golden opportunity to continue his Grand Slam odyssey with a third-round US Open slip-up at Flushing Meadows. 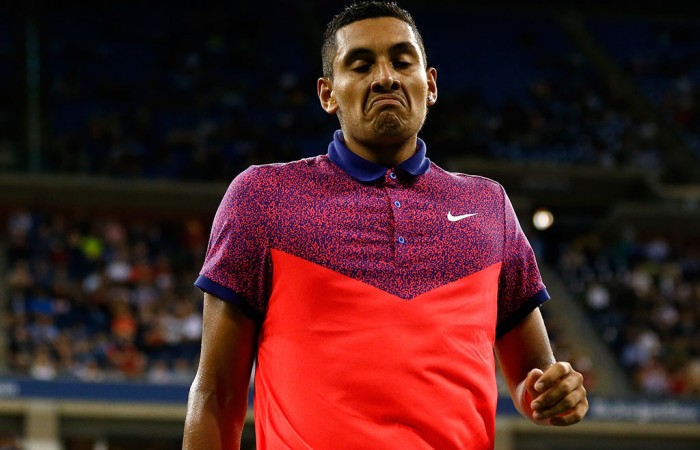 Nick Kyrgios rued letting slip a golden opportunity to continue his Grand Slam odyssey with a third-round US Open slip-up at Flushing Meadows.

Veteran Spaniard Tommy Robredo ended Kyrgios’ campaign in New York, but only after the teenage sensation lit up Arthur Ashe Stadium with a lightning start that had former world No.1 Jim Courier gushing in the commentary box.

Yet the Wimbledon quarterfinalist was unable to sustain the early onslaught as Robredo used all his class and guile to grind out a 3-6 6-3 7-6(4) 6-3 victory that leaves Casey Dellacqua as Australia’s lone singles survivor at the season’s final major.

Robredo, who last year ousted five-time champion Roger Federer, rallied from two sets down to defeat Simone Bolleli in round two and on Saturday night mastered Kyrgios in the arts of pluck and court-craft.

Kyrgios was left to lament what might have been after failing to convert his advantage from a set and a break up.

“I didn’t take opportunities when I had them,” Kyrgios said.

“A couple points here and there, that match wouldn’t have slipped out of my hands tonight.”

Not taking the court for their prime-time match-up until after 10pm, Kyrgios started like a man trying to make a midnight flick.

He led 5-0 after barely 15 minutes and secured the first set before many spectators had even found their seats.

“This is really impressive stuff. This kid is having his way with last year’s quarterfinalist. Someone better go out there and ask him if he’s even awake. This is what we call a dream-like state. This is the zone right now. This is a tremendous athlete playing tennis and you’re seeing the full arsenal.”

Bidding to become the first teenager in six years to make the men’s last 16 at Flushing Meadows – and to also overtake Lleyton Hewitt as Australia’s new No.1 – the 19-year-old was unable wrestle back the momentum once Robredo snatched the pivotal third-set tiebreaker.

While the 32-year-old’s prize for a quintessential win for experience over youth was a last-16 clash with Australian Open champion Stanislas Wawrinka, Kyrgios vowed to learn from his frustrating near miss.

Set to climb into the world’s top 50 after backing up his Wimbledon heroics with another fine Grand Slam run, Kyrgios said playing on the sport’s biggest stages this year in Melbourne, London and New York had been priceless.

“Having these opportunities, it’s massive. It’s massive confidence for me,” he said.

“You gain so much experience from playing on such big courts. People dream of it. It takes them a whole career to get on those courts.

“I’m so used to that surrounding now, I know what to expect.”