Dellacqua powers into fourth round

Casey Dellacqua has pounded winner after winner against Czech Karolina Pliskova to scorch into the last 16 of the US Open at Flushing Meadows. 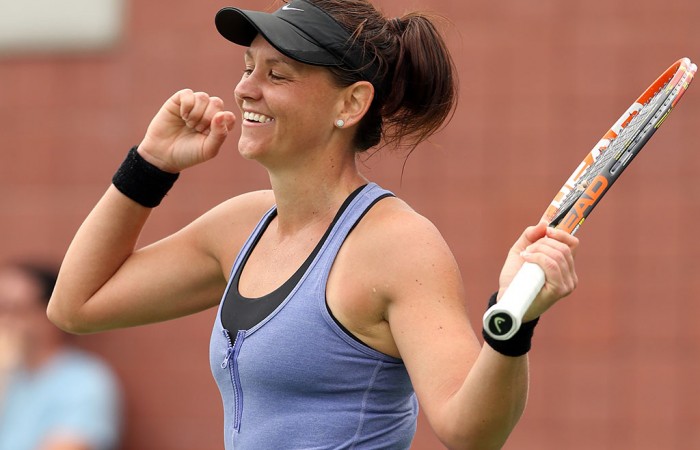 Casey Dellacqua has pounded winner after winner to scorch into the last 16 of the US Open at Flushing Meadows.

In an awesome display of unflinching counter-punching, Dellacqua defeated rising Czech Karolina Pliskova 6-3 3-6 6-4 in a high-quality third-round encounter on Saturday.

Pliskova had trounced Dellacqua in straight sets in their only previous meeting, last October in Kuala Lumpar, but the 29-year-old West Australian once again proved she’s the most improved player in women’s tennis.

After tumbling out of the world’s top 200 following her first-round defeat in New York last year, Dellacqua is incredibly now on the verge of becoming Australia’s new No.1 with a top-25 ranking.

The big-hitting left-hander next plays Flavia Pennetta on Monday and victory over Italy’s 11th seed would thrust Dellacqua into a grand slam quarterfinal for the first time.

“It’s awesome for me because I’ve never been past the second round here at the US Open before and I’ve worked really hard the whole year,” Dellacqua said.

“I’ve got to the fourth round a couple of times at the Aussie Open before (including this year) and been close, but I’d really like to make my first quarterfinal.

“I really want to finish this Slam off just as well as I started the year.”

Seeded at a major for the first time, Dellacqua double-faulted in a nervous start against Pliskova and had to fight off a break point in the opening game.

Ranked 10 spots below Dellacqua at No.42 in the world, Pliskova often dominated rallies but was left shellshocked by the Australian’s relentless scrambling and power.

Dellacqua grabbed the only break of the first set in the fourth game, clinched the set with a crisp backhand cross-court pass after 34 minutes and quickly had Pliskova under pressure in the second.

But after staving off four break points serving at 2-3 down, the 22-year-old hit back to break Dellacqua twice to put the match on level terms.

Pliskova had relied on 10 aces to stay in the match, but came unstuck with an untimely double-fault to hand Dellacqua a break in the opening game of the deciding set.

The Czech broke straight back only to drop serve as Dellacqua surged to a 3-1 lead and then have Pliskova trailing 0-30 in the fifth game.

Dellacqua was unable to snare the decisive double break then, but did so with a booming forehand winner that caught the back of the line to go 5-2 up.

But in a match full of twist of turns, Dellacqua still had to survive a few more hairy moments before posting her second fourth-round showing at a major this year.

She dropped serve at 5-2, but finally advanced to repeat her Australian Open run when Pliskova sprayed a backhand wide on Dellacqua’s second match point after one hour and 54 minutes.

“I thought my quality of tennis was pretty good,” Dellacqua said after striking four aces and 26 clean winners.

“It was a really challenging match. She went through a purple patch there where she stepped up and hit some clean winners and I had to just fight as hard as I could to stay in every point.

“Then I tried to just put as much pressure on her as I could and hope to come out with a win.”