Nick Kyrgios is already being afforded top billing in New York, but the teenager's coach says Australian tennis's new Kid Dynamite is still years away from reaching his peak. 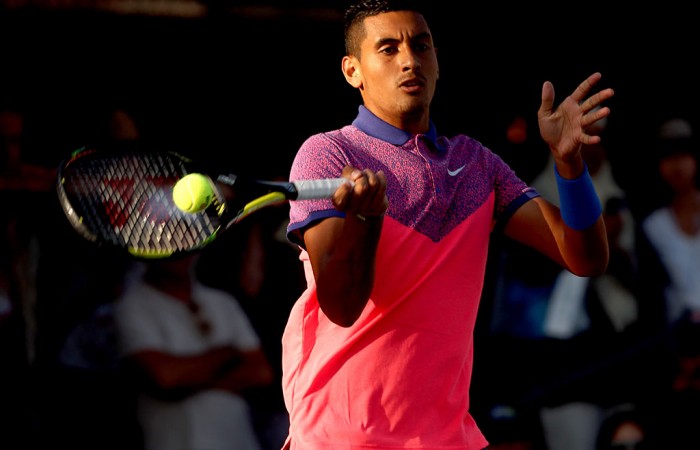 Nick Kyrgios is already being afforded top billing in New York, but the teenager’s coach says Australian tennis’s new Kid Dynamite is still years away from reaching his peak.

Forget Broadway, Kyrgios is the hottest ticket in town on Saturday night, with US Open officials scheduling the 19-year-old’s third-round showstopper with Tommy Robredo as the prime-time feature match at Arthur Ashe Stadium.

Kyrgios will take on last year’s conqueror of Roger Federer in the second night match around 9pm (11am Sunday AEST) for a spot in the last 16 at the season’s final Grand Slam.

By powering into the third round in just his second main-draw appearance at Flushing Meadows and backing up his heroics last month at the All England Club, the Wimbledon quarterfinalist has already proven himself to be the real deal.

Victory over Robredo, the tournament’s 16th seed, would catapult Kyrgios into the world’s top 50 and above Lleyton Hewitt as Australia’s new No.1.

“I think what the Australian public needs to realise is he’s probably three years away from finding his best tennis, and Nick would know that,” Eagle told AAP.

“There’s a real strong plan in place and, if he sticks with that plan and gets fitter and stronger and gets enough matches, I think in three years you can expect to see him doing some damage.

“People should be excited. They forget how young and raw he still is.”

Kyrgios’s Open run has come despite the teenager only playing two matches since Wimbledon, where he toppled Richard Gasquet and world No.1 Rafael Nadal.

He has thundered down 48 aces in seven sets and Eagle was particularly impressed by the former world junior champion’s composure in defeating two-time US Open semifinalist Mikhail Youzhny in the first round.

“That was a hell of an effort,” he said.

“He’s got a great quality to find the finish line, to know how to win. We saw that in the fourth set where he played an unbelievable tiebreaker to close out it.

“As we saw at Wimbledon, he is a kid purely, just because of the weapons in his game, capable of having good wins.

“I mean, to have the confidence to come out and win these matches after playing twice in more than a month shows that.”

Eagle said his grounded charge wouldn’t get ahead of himself and Kyrgios was making all the right noises before squaring off with Robredo, ever respectful of the classy Spaniard.

“You just got to go into the match knowing he’s one of the greatest competitors,” Kyrgios said.

“You know he’s never going to give anything easy. Go out there and know it’s never over until you have that match point and take it.”

Success over Robredo would propel Kyrgios into a likely fourth-round clash on Monday with Australian Open champion Stanislas Wawrinka.