Kyrgios powers into third round in New York

UPDATED 2:20 pm: Teenage excitement machine Nick Kyrgios is refusing to place a limit on how far he can go after continuing his captivating grand slam run at the US Open in New York. 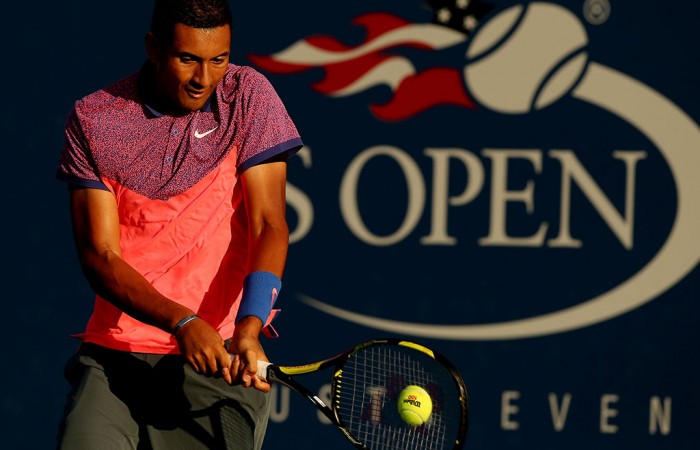 Teenage excitement machine Nick Kyrgios is refusing to place a limit on how far he can go after continuing his captivating grand slam run at the US Open in New York.

Kyrgios will play Spanish veteran Tommy Robredo on Saturday for a place in the last 16 after sweeping past Andreas Seppi in a second-round serving masterclass at Flushing Meadows.

“If I play like I played today, just do whatever I can to recover and keep having fun, I can make an impact,” the 19-year-old said after his 6-4 7-6(2) 6-4 dispatch of the experienced Italian.

Fans flocked to Court 5 to see tennis’s new new Kid Dynamite in action, filling every nook and cranny, and he didn’t disappoint, jamming down another 22 aces – taking his tournament tally to 48 in six flawless sets – in the near-two-hour clinic.

Kyrgios didn’t drop serve once and said he was pumped to have followed up his giant-killing quarter-final run at Wimbledon – where he took down Rafael Nadal and Richard Gasquet – with a last-32 showing in New York.

“It’s always a good feeling to win another match at a grand slam, especially new ground for me,” he said.

“(I’ve) never made it past the first round at the US Open main draw. To have gone to the third round, having beaten some quality opponents, feels good.”

Almost certain to replace Lleyton Hewitt as Australia’s new No.1, Kyrgios said it was easy to stay focused knowing next up is Robredo, the seasoned 14th seed who took out his boyhood idol Roger Federer in the fourth round last year.

“He’s probably one of the most experienced players on tour,” Kyrgios said.

“He’s still playing some really good tennis. I know I can’t get too confident. I’m going to go out there, have fun, just play my game and see how it goes.”

“It’s one of those matches where you walk off and think `what just happened?'”

Dellacqua, though, lived up to her newfound seeded status to reach the third round for the first time, overcoming a one-set deficit, some dubious umpiring and 40 unforced errors to defeat Chinese qualifier Qiang Wang 4-6 6-4 6-2.

The other Australian in action on Thursday, Matthew Ebden, was trounced 6-1 6-3 6-4 by No.23 seed Leonardo Mayer from Argentina.

Tomic takes on Spanish fourth seed David Ferrer for a place in the last 32 before Groth and five-times champion Roger Federer clash in a second-round showstopper under lights on Friday night (9am Saturday AEST),