Stosur wins through at US Open

Sam Stosur has swept to a straight-sets victory in the opening round of the US Open on Day 2 action at Flushing Meadows in New York. 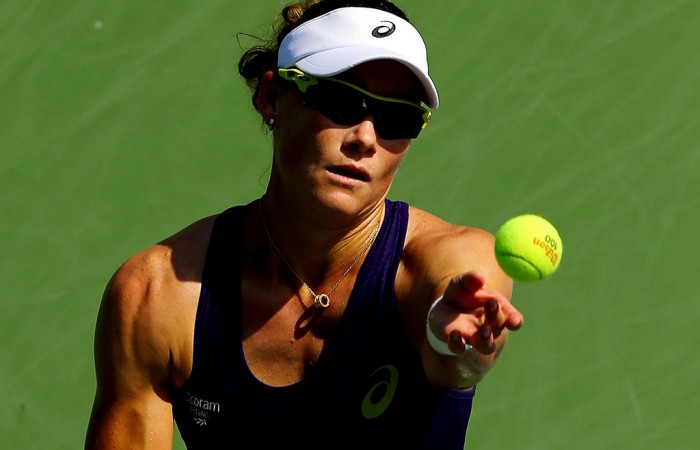 Sam Stosur has swept to a straight-sets victory in the opening round of the US Open on Day 2 action at Flushing Meadows in New York.

Intent on avoiding a repeat of her disastrous first-round loss last year to 17-year-old world No.296 Victoria Duval, Stosur was on her game from the get-go.

The 24th seed broke Davis three times to race through the opening set.

She broke the American for a fourth time early in the second before suffering her only service lapse in the fourth game.

Stosur regrouped immediately and, another break and three holds later, booked a second-round meeting on Thursday with Estonian Kaia Kanepi.

“I was certainly prepared for a tough match today, but I was able to come out and play well and do exactly what I wanted to do. So that was a good feeling.”

Stosur made life particularly tough for the 157cm-tall Davis with her deadly second-serve kicker.

“Tactically, I probably used the right serve at the right time,” she said.

“With the way the conditions were, I was able to use my kick serve a lot and change it up and go hard and able to make her feel uncomfortable on return, which is exactly what I want to do.

“Overall, it was a pretty solid match.”

The 24th seed knows she faces a much taller order getting past Kanepi on Thursday.

The Estonian sent Stosur packing from Wimbledon in their only previous Grand Slam meeting in 2010.

“She has a big game. (We) have played some matches and I’ve won and lost. It’s just whether or not she’s putting it together. To be honest, I haven’t seen her play much recently.

“I know playing Kaia you have to go out there and try and win the match because she’s a dangerous player.”