Classy Kyrgios into second round

UPDATE: 2.20pm: Teenage tennis sensation Nick Kyrgios has made an explosive start to the US Open, eliminating two-time semifinalist Mikhail Youzhny in the opening round. 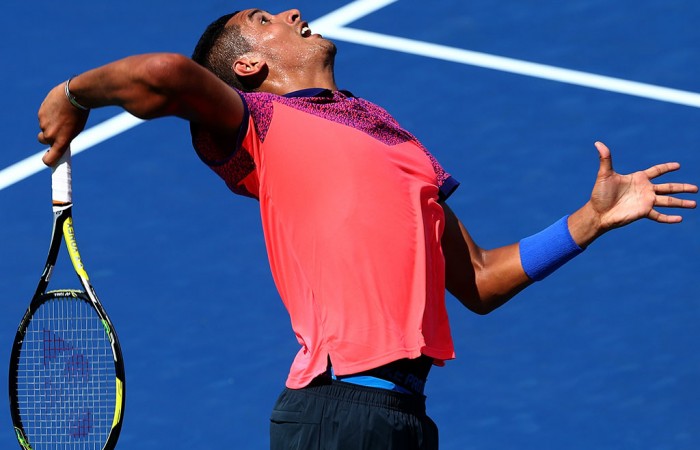 Teenage tennis sensation Nick Kyrgios has made an explosive start to the US Open, eliminating two-time semifinalist Mikhail Youzhny in the opening round.

In a spectacular encore to his breathtaking win over Rafael Nadal at Wimbledon, Kyrgios sent the 21st-seeded Russian packing with a nerveless 7-5 7-6(4) 2-6 7-6(1) victory on Monday.

Youzhny had beaten Nadal and fellow former Open champion and world No.1s Andy Roddick and Lleyton Hewitt in past visits to Flushing Meadows and only two weeks ago stopped the extraordinary giantkilling run of Jo-Wilfried Tsonga in Cincinnati.

But the world No.23 had no answer to Kyrgios’s awesome firepower as the Australian crunched 26 aces and 68 winners in the four-set demolition job on Show Court 17.

“I knew I had to serve well. Those are good stats,” Kyrgios said.

“I was struggling a little bit about the two-and-a-half hour mark,” he said.

“But I knew that if I hung in I would get that second wind where I could start playing good tennis again, and that’s what happened in the fourth set.”

“He’s a quality player. It’s going to be a tough match,” Kyrgios said.

“He’s solid on both wings. He has a good serve as well. I think I’m going to have to play aggressive and keep the match on my racquet. It’s going to be exciting.”

The 19-year-old sought treatment in both the first and third sets to have the forearm that supports his two-handed backhand vigorously rubbed.

Kyrgios took the opening set after claiming the only service break in the 11th game.

After nervously committing his first two double-faults of the match when serving for it at 6-5 and 40-love, Kyrgios steadied to close out the set with an unreturnable serve.

Australia’s Wimbledon quarterfinalist unleashed a stinging backhand return to break Youzhny in the first game of the second set and had two further chances points to seize a double break at 3-1.

The let-off could have been costly as the Russian reeled off three straight games to lead 5-4, only for Kyrgios to calmly recover from 15-30 down to level at 5-5.

Kyrgios took control of the tiebreaker, opening up a 5-1 advantage before pocketing the set for a two-sets-to-love lead with a massive ace followed by another unreturnable delivery.

The youngster lapsed to drop serve twice as Youzhny grabbed the third set and then appeared poised to sending the match to a deciding fifth set.

But after digging in to save set points serving at 4-5 in a marathon 10th game, Kyrgios broke the Russian for a third time with a clean backhand winner down the line.

Showing maturity beyond his years, Kyrgios raced through the fourth-set tiebreaker 7-1 to clinch victory after three hours and three minutes.

While Youzhny is no Nadal, the 32-year-old entered the match with credentials and form.

His recent success over Tsonga came the week after the Frenchman had taken down Novak Djokovic, Andy Murray, Grigor Dimitrov and Roger Federer in consecutive matches to win the Toronto Masters.

Kyrgios’ impressive victory also came a year after Youzhny denied his Davis Cup teammate a place in the quarterfinals with a dogged five-set comeback win over Hewitt.