UPDATE: Sam Stosur has advanced to the semifinals of the WTA Connecticut Open in New Haven with a three-set victory over Belgian Kirsten Flipkens. 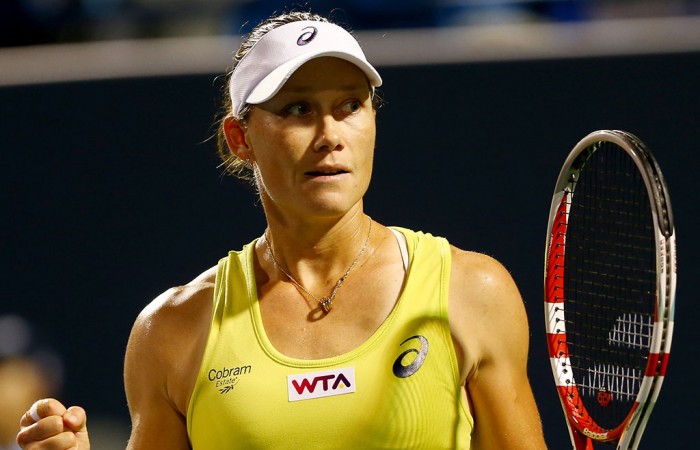 Sam Stosur has advanced to the semifinals of the WTA Connecticut Open in New Haven with a three-set victory over Belgian Kirsten Flipkens.

The Australian recovered from a dip in form in the second set to run out a 6-3 4-6 6-3 winner in one hour and 36 minutes, moving her through to her second semifinal of 2014.

The win sets up a meeting with No.2 seed and reigning Wimbledon champion Petra Kvitova, against whom Stosur is 1-5 in the career head-to-head.

“It was definitely not an easy match out here tonight, she’s a very tricky opponent,” said the world No.25.

“I had to try and stay calm … I guess I served very well tonight which obviously helped me hold serve most of the time, and that really settled me down and made me feel better about what was going on out here.

“I decided to come here (to New Haven) pretty late but I’m obviously very happy that I did decide to come here now. I’ve made it to the semis and played three really good matches at least and really looking forward to tomorrow. So I guess it’s a great feeling going into New York.”

Stosur came out in a blaze of aggression to start the match, in much the same manner as she did on her way to trouncing Eugenie Bouchard in her previous match.

With her serve firing and giving her immediate control over points, Stosur broke early and built a 4-1 lead.

She maintained her service break advantage and pocketing the first set thanks to 10 winners, four aces and a first serve percentage of nearly 80.

The dynamics of the match shifted in the second set, when Flipkens settled into the contest and began peppering Stosur’s backhand wing.

As the Australian’s backhand return broke down she grew visibly frustrated, while Flipkens grew in confidence, advancing to the net for plenty of success and keeping her unforced errors to a minimum.

The third set progressed on serve until the seventh game, when Stosur belted an inside-out forehand winner to break for a 4-3 lead.

After falling behind 0-30, Stosur recovered to hold for 5-3 and then broke serve again as the fight drained from Flipkens’ game.

She closed out the match with a forehand winner down the line, taking the final four games in a row.

“The last couple games I just tried to return a little bit smarter, tried to place it, then do what I was trying to do on the next ball,” Stosur said.

“Once I was able to hit a return to a better part of the court, I felt I was in more control of the point.”

Her attention next turns to trying to solve the Kvitova riddle.

“I’ve got to go out there and try to play aggressive. I can’t go out there and be passive against someone like Petra. She hits the ball very, very well, hits it really clean. She goes after her shots. Once she’s in control of the point, makes things very difficult to turn it around,” she assessed.

“Sometimes playing lefties, it pulls me out of court the way I don’t necessarily always want to be. It’s a matter of trying to do things well at the start of the rally and then keep control of it once you’ve got it.”