Sam Stosur has produced a dazzling performance to overwhelm Eugenie Bouchard in the second round of the WTA Connecticut Open in New Haven. 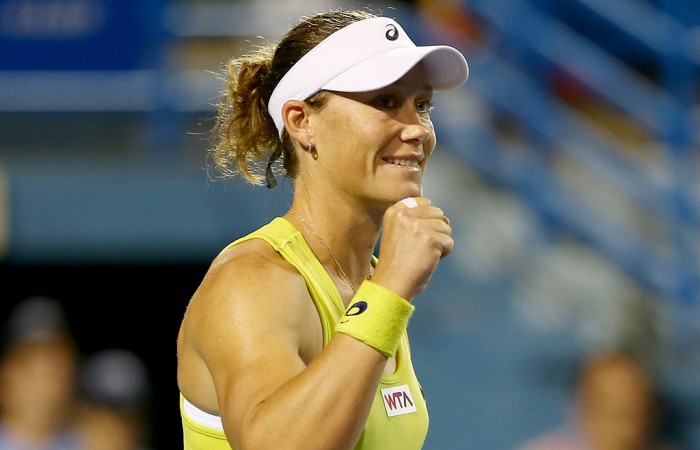 Sam Stosur has produced a dazzling performance to overwhelm Eugenie Bouchard in the second round of the WTA Connecticut Open in New Haven.

Playing in the feature night match on New Haven’s stadium court, Stosur romped to a 6-2 6-2 victory over the third seed in just one hour and 13 minutes.

“I think I had to come out here and play aggressive and try and serve well and just play the way I know I can play. She likes to stay on the baseline and play hard and do all that, so you’ve got to do that to her first,” Stosur said.

The win sends her into the quarterfinals of the Premier-level event, where she will face Belgian Kirsten Flipkens; Flipkens overcame Andrea Petkovic in a dramatic third-set tiebreak.

From the outset, Bouchard – the world No.8 and one of the form players of the 2014 season – simply had no answer to Stosur’s powerful, all-court attack.

The Queenslander’s serve and forehand were firing, the former producing four aces throughout the first set, one of which was a thundering ace down the T to claim it 6-2.

It was more of the same in the second, with Stosur pouncing on anything short from the Canadian and moving the nimble Bouchard from side to side with heavy drives and wicked angles.

Stosur’s volleying skills were also on display; frequently advancing on the net, she finished the match having won nine of 10 points in the forecourt.

She served out the match in the most confident style possible, landing four powerful first serves and producing a service winner up the T on match point to hold to love.

“It’s great to have come here and won at least two matches,” said Stosur, who finished the match with 24 winners to Bouchard’s 13.

“I’m really looking forward to playing again tomorrow. The first round I played here was really long and tough; tonight I played really a lot better and hopefully tomorrow I can play better again.”