UPDATE: Sam Stosur has advanced to the second round of the Connecticut Open with a hard-fought victory over Japan's Kurumi Nara. 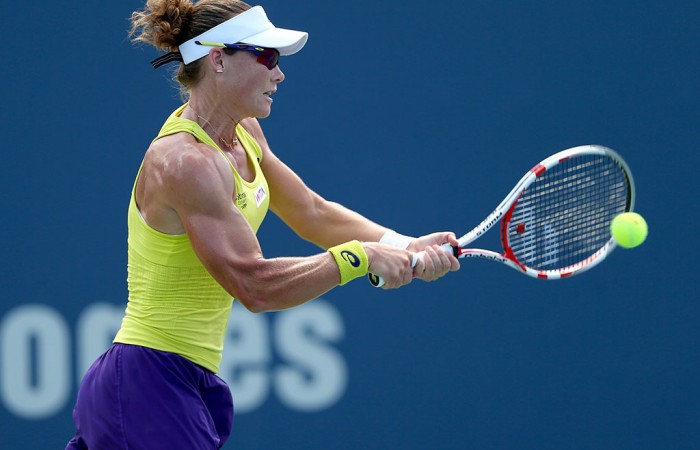 A hard-fought win over Japan’s Kurumi Nara at the WTA Connecticut Open has provided Sam Stosur a timely shot in the arm ahead of the US Open.

Less than a week after pushing world No.1 Serena Williams at a WTA tournament in Cincinnati, the Australian battled Nara for nearly two hours and 40 minutes to win the first round match 7-6(5) 6-7(10) 6-2 on Monday.

Nara, ranked seven places behind Stosur at 32nd, gave everything she had in a marathon second set – the 2011 US Open champion blowing three match points in the tiebreaker. Stosur let another get away before winning on her fifth chance.

“If you can win every match easily and not be tested, then that’s fantastic – but that doesn’t really happen in this world,” said wildcard entrant Stosur.

“Anytime you can battle through a match like that, it’s certainly great for your confidence.

“I guess it’s everything that you’ve worked on in practice, and then it happens in matches.

“To come out like that, it’s a really great feeling, and I’m happy about that.”

The world No.25 next faces rising star Eugenie Bouchard, who easily dispatched Serbia’s Bojana Jovanovski in the first round of the hardcourt tournament.

The world No.8 needed only 52 minutes to beat Jovanovski 6-1 6-1, winning the first seven points of the match.

Stosur has played Bouchard twice before. She won their most recent match, the 2013 Osaka final, but retired from their first clash in Charleston earlier last year.

The pair also met at the Hopman Cup in January, with Bouchard winning in three sets; this match does not count in their official head-to-head as the Hopman Cup is classified as an exhibition event.

The pair also met at the Hopman Cup in January, with Bouchard winning in three sets; this match does not count in their official head-to-head as the Hopman Cup is classified as an exhibition event.