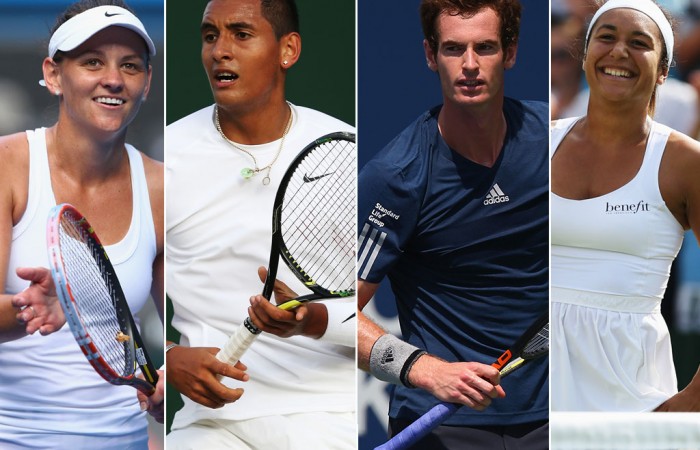 Nineteen-year-old Kyrgios, who upset Rafael Nadal to advance to the quarterfinals at Wimbledon last month, will pair with Perth’s own Casey Dellacqua for Australia.

Murray, the 2013 Wimbledon and 2012 US Open champion, returns to Perth for the third time where he will be joined by 22-year-old Heather Watson.

The Scot, who has captured 28 ATP singles titles and has reached seven Grand Slam singles finals, including finishing runner-up at three Australian Opens, considers the Hopman Cup as a pivotal event in the lead-up to the first Grand Slam of the year.

“I find it [Hopman Cup] very good preparation for the Australian Open. The organisers look after everyone extremely well there,” said Murray, who played the Hopman Cup in 2010, when he was a finalist, and in 2011.

“I think just getting there early you get at least three single matches, you get the mixed doubles as well, which is good fun, it sharpens up the net game.”

“Now that it’s outdoors too, it’s absolutely perfect, so I’m looking forward to it,” continued Murray, who retained a career-high ranking of No.2 and a top 4 ranking for the sixth straight season in 2013.

Murray and Watson, Great Britain’s No.1 female player, will line-up to play mixed doubles for the first time.

“This will be the first time Andy and I will have played mixed doubles so I hope we can do our best to win the Hopman Cup. That would be brilliant,” said Watson, the world No.46.

“I’ve heard great things about the event. I grew up watching it, so the chance to play and team up with Andy is very exciting.”

Kyrgios is the youngest player in the top 100, having climbed up the rankings by more than 750 places since January 2013 to reach a career-best ranking of 58 this week. The teen sensation will make his Hopman Cup debut in 2015 and is keen to put on a show for the local crowds.

“Yeah I’m hopefully going to show them that I’ve improved more since they last saw me play. I’ve been working hard and it’s another chance to go out there and see where I’m at, to just compete and do what I love to do,” said Kyrgios.

“I’ve heard the Perth Arena is a great stadium. The atmosphere in there is really good from what I’ve seen. Hopefully we can get that atmosphere like a Davis Cup tie. That would be just sensational to play in front of a crowd like that because it really gives me the energy and spark to perform out there.

“I’ll be teaming up with Casey and I think she’ll be the leader of our little duo. I’m going to look up to her so hopefully she can lead me when we play a bit of mixed doubles.”

Perth native Dellacqua achieved a milestone of her own on Monday, moving into the world’s top 30 for the first time, and is looking forward to returning to WA to play at the Perth Arena.

“I’m really happy to be playing the Hopman Cup again, it’s always a privilege to go out and play for your country,” said Dellacqua, who’s recent ranking rise is likely to see her seeded at the US Open later this month.

“To play in front of my home crowd in Perth is a bonus. I always love playing in Australia and really enjoy the crowd support. To have the chance to play some big matches in my hometown will be extra special and no doubt all my family and friends will come to cheer us on.

“I’m also really excited about playing at the Perth Arena. It looks amazing on TV and both Alicia [Molik] and Sam [Stosur] have told me it’s fantastic. I was really disappointed that I had to withdraw from the 2013 Hopman Cup with injury, so it will be good to get out there and experience it for the first time.”

In the past 20 months Dellacqua has won three WTA doubles titles and has reached three Grand Slam doubles finals. Earlier this year the 29-year-old reached the fourth round at the Australian Open before reaching the quarterfinals at Indian Wells.

“I’ve had a good year so far and I’m motivated to keep working hard and to perform well. To hit a career-high ranking is exciting and I’m looking forward to building on this,” continued Dellacqua.

Great Britain and Australia are the first two teams to be confirmed for the Hopman Cup and Tournament Director Paul Kilderry is delighted they have decided to kick start their New Year in Perth.

“We are extremely excited to welcome superstar Andy Murray back to Perth. He was hugely popular when he played in 2010 and 2011 and I’m sure the fans will be thrilled to see him again at Hopman Cup 2015,” said Kilderry.

“Andy and Heather promise to be a great team and are definite contenders to win Great Britain’s first ever Hopman Cup crown in January.

“Our Aussie team always attracts a lot of attention and we’re very excited we’ve been able to sign up Nick Kyrgios, who had such an inspirational run at Wimbledon. It’s always great to have Casey in the line-up as a local Perth girl, especially as she’s in the best form of her career.”

“Tourism WA have been a founding sponsor of the event and we’ve enjoyed a close working relationship, with the combined objective of showcasing Perth to the world. We are very pleased they’ve extended their support for another three years,” addedKilderry.

“The Hopman Cup is Perth’s premier international sporting event and we look forward to growing both the event at the stunning Perth Arena, and interest in our terrific sport in Western Australia.”

Hopman Cup is proudly supported locally by the State Government, through Tourism WA, and will take place at Perth Arena from Sunday 4 to Saturday 10 January 2015.

To access exclusive pre-sale offerings you can become a Hopman Cup member or a Tennis West registered player.

Hopman Cup ticket packages are on sale to the general public from 1 October 2014.